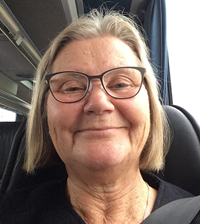 I applied for the veterinary education because I wanted to become a pathologist. Which is because I participated in a lecture series about cancer of a professor in pathology in my youth. I became extremely fascinated by the subject and thought of a future where I could combine my great animal interest with cancer research. Already as a student, I came to be particularly interested in the dog's mammary tumours. The tumours are frequent and a challenge to diagnose. Why is there sometimes both cartilage and bone tissue in tumours formed in a tissue where there is only epithelium and connective tissue present?

Professor emerita in Cell- and Tumour biology at SLU, Dept. of Anatomy, Physiology and Biochemistry.

1998 - 2000 Positions at the Department of Anatomy and Histology, SLU; as Laboratory Veterinarian and University Assistant Master.

1983 - 1998 Positions at the Department of Pathology SLU; as Assistant, PhD student, Laboratory Veterinarian and Research Assistant.

1983 - 1990 Appointment as District Veterinarian one weekend/month.

1979 - 1982 (Summer vacations) Positions at the Laboratory for Pathology-Anatomy, National Veterinary Institute (SVA), 1979 as autopsy technician and 1980-1982 as Laboratory Veterinarian.

1978              (Summer vacation) Position at the Department of Anatomy and Histology on a grant from the Royal Forest- and Agricultural academy.

Shared award for the best doctoral thesis presented at the Faculty of Veterinary Medicine during 1987 - 1989, Sällskapet för Veterinärmedicinsk Forskning, May 1990.

Helena Wensman, who defended her doctoral thesis entitled: “Differences in plasticity and expression of developmental genes in canine mammary carcinomas and sarcomas”, 2009-04-29 (SLU No. 2009:15).

Member of the examination board at the defence of 11 Doctoral theses (Karolinska Institute (KI), SLU, Uppsala University (UU) and Umeå University), 1993-2012.

Swedish delegate and member of the board in the EU, COST CM1106 action ”Chemical Approaches to Targeting Drug Resistance in Cancer Stem Cells (StemChem)”, 2012-2016.

Swedish delegate and member of the board in the EU, COST B20 action ”Mammary gland development, function and cancer”, 2003-2006.

Expert advisor in the ”Swedish Centre for Animal Welfare (SCAW)”, 2010-

Editorial/advisory board for international journals

Member of the Editorial board of the journal “ International Journal of Veterinary Health Science & Research (IJVHSR)”, 2013-

Member of the Editorial board of the journal "Veterinary and Comparative Oncology", -2012.

In the last 8 years active participation in 16 international conferences.

Diplomat of the European College of Veterinary Pathologists (ECVP), 1996 - 2017 (re-registration is required every 5th year)

Didactic report, funded by a three months grant from the Unit of Pedagogy, entitled ”A didactic study of the development of the pathology subject in veterinary education”, SLU (1996).

Please see below under the heading "Publikationslista" (Publication list).

Teacher in the Socrates/Erasmus programme at the Institute of Pathology and Forensic Veterinary Medicine at the University of veterinary medicine in Vienna, Austria, April 2-8, 2001.

Research
The mammary glands are unique in the way that they are not mature at birth but not until puberty or even not until after a full term pregnancy. This means that genes that in other organs in the body only are embryonic expressed can be studied after birth in the mammary gland. The knowledge about the so-called stem cells in the breast is limited and the processes that transform these cells into tumour cells are not fully understood. Our research is focused on the different types of cancer that appear in the breast, although carcinomas that originate from the epithelial cells dominate, sarcomas and mixed tumours also appear and the origin of the latter types are unknown. The aim of our research is to understand how the different types of breast cancer are formed and the end is to prevent their genesis.

Project
We are studying the molecular mechanisms for tumorigenesis in own established canine mammary tumour cell lines of different phenotypes, complex adenoma, carcinoma, spindle cell tumour, osteosarcoma and carcinosarcoma as well as in primary tumours. The focus is on why and how the different phenotypes are formed

In house we do post-mortem examinations including histopathology; cell culture techniques; immunocytochemistry on cells and immunohistochemistry on frozen- and paraffin sections; Western blot analyses. In collaboration we do flow cytometric cell sorting, gene expression and tissue arrays.