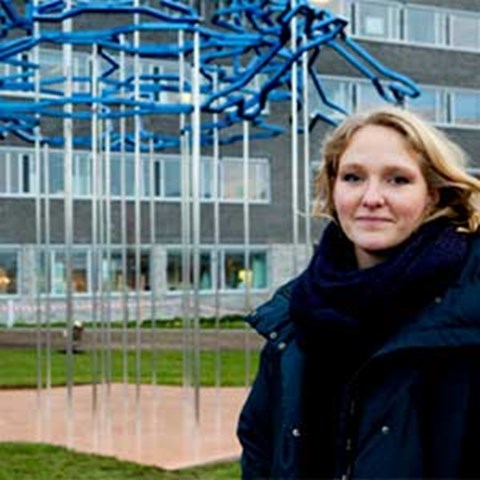 Outside the MVM building you will find the sculpture Fractal Cloud by Ebba Bohlin.

Fractal Cloud has borrowed its pattern from the Moorish palace Alhambra in Granada, Spain. In Ultuna, there used to be a harbour used by Vikings when travelling east. Archaelogists have discovered objects in a Viking age grave here at Ultuna. Objects with similar patterns to objects from the Alhambra.

The Viking age objects as well as the fact that scientists from all over the world are gathered here in the MVM building inspired the artist Ebba Bohlin into making the sculpture.

Fractal Cloud is a large sculpture - six meters high and 50m2 on the ground. The observer is tempted to sit under the bluepainted iron cloud. The ground, orange and star-shaped, is at the same time forcing itself into the slope of the lawn in an almost aggressive way.