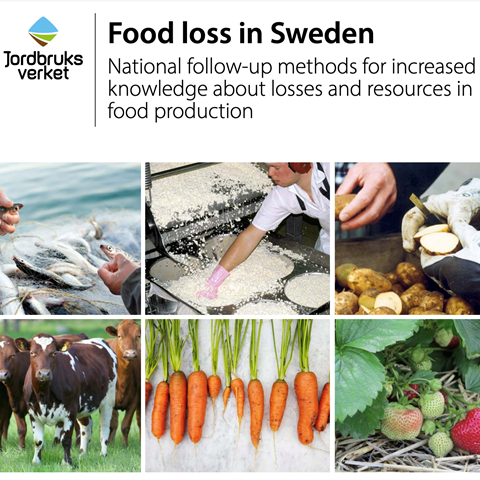 On 23 September, the UN Food Systems Summit meeting was held, aiming to highlight and advance the urgent need of global transformation of the food systems. One of Sweden's official contributions to the meeting is a report on methods for following up food losses early in the production chain. The report has been produced by the Swedish Board of Agriculture with the help of eight researchers from SLU.

One third of all food produced globally is lost in the trail between farm to fork. This waste accounts for a significant environmental impact and unnecessary resource use. In addition, wastage contributes to economic losses in the form of poorer yields in cultivation, rearing, processing and preparation, and also result in loss of calories and nutrition.

While many countries work to reduce food waste and also measure food waste as a part of this work, the concept of food waste and the focus of food waste work is usually limited to food that has already reached the stage of processing, store sales and consumption. However, these measurements often do not include losses earlier in the production chain - ie. in primary production, when products and raw materials produced for the purpose of becoming food do not become so. The FAO has estimated that global food losses after harvest and slaughter are about 14 percent and that significant amounts are also lost before harvest.

Few countries in the world follow-up the food losses that arises at the beginning of the food chain on a national basis and Sweden will be one of the first to do so. On behalf of the Swedish Board of Agriculture, eight researchers from SLU last year produced a method description for follow-up on food losses early in the production chain. The report has now been translated and published in English in connection with the Food Systems Summit on 23 September.

- The report is one of a handful of Swedish deliveries ahead of the UN summit on sustainable food systems, says Karin Lindow at the Swedish Board of Agriculture. The report will be disseminated to other countries via the food waste coalition that will bring the work forward after the summit, and we are in contact with the FAO who are interested in the report. We want more people to start measuring food waste all the way from farm to fork, and our work can be an example to learn from.

- In this assignment, we have taken advantage of the broad and appropriate expertise that exists within SLU, to be able to develop a method for systematic assessment of food losses from widely differing production systems, says Ingrid Strid at the Department of Energy and Technology.

The methods that SLU has contributed to, are mentioned in a food waste film shown at the summit itself, where the Minister of Trade and Industry, Ibrahim Baylan, highlights the Swedish method for following up on food losses in primary production and industry.

Based on the methods suggested by SLU researchers, Sweden has now begun the work to follow up on the milestone targets for reduced food waste within the Swedish environmental objectives ("An increased share of food production will reach stores and consumers by 2025"), but also follow-up of the goals in Agenda 2030. Analyses have now started for the first follow-up of food losses early in the production chain, also with the help of researchers from SLU.

In order for both companies and authorities to be able to work more efficiently with reducing losses and waste, there must be a good overview of where food waste arises, how large the waste is at different stages and where the challenges lie.

In 2020, SLU received an assignment from the Swedish Board of Agriculture, via the government assignment on reduced food waste, to produce method descriptions for follow-up on food losses in Swedish primary production and in subsequent processing stages. In November 2020, eight SLU researchers delivered method descriptions for eight raw materials, selected to together represent the Swedish food system: beef, milk, pork, fish, carrots, potatoes, strawberries and wheat. In addition to the eight SLU researchers, researchers from RISE (Research Institutes of Sweden) have also participated in the report, as have the Swedish Environmental Protection Agency, the National Food Administration and Statistics Sweden, in dialogue with industry organizations.

The method descriptions form the basis for a report from the Swedish Board of Agriculture which was published this spring and which has now also been translated into English: Food losses in Sweden. Methods for increased knowledge about food production losses and resources. The English version is published in connection with the Food Systems Summit on 23 September

Large parts of the research at SLU have points of contact in the food system and / or the global development goals. Here is more information about Food Systems at SLU: