Edible crickets can be reared on weeds and cassava plant tops 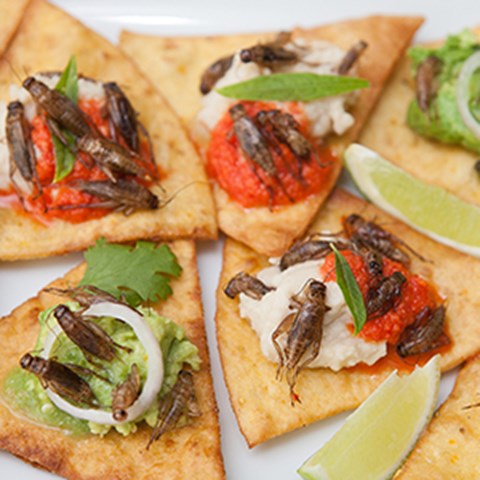 To become a sustainable alternative to meat, reared crickets must be fed feeds other than the chicken feed that is most commonly used today. Researchers from the Swedish University of Agricultural Sciences now present a study which shows that there are weeds and agricultural by-products that actually work as single ingredients in feeds for crickets. The study was conducted in Cambodia, where many children suffer from malnutrition and where the need for cheap protein is large.

The study was led by Anna Jansson, professor of animal physiology at the Swedish University of Agricultural Sciences. The results have very recently been published in the Journal of Insects as Food and Feed.

"Since there are both climate and environmental benefits of eating insects, we believe that this habit will become more common, also in Western countries. What our study shows is that it is possible to rear crickets on feeds that don't compete with other kinds of food production", says Anna Jansson.

Reared insects are increasingly seen as an environmentally friendly alternative to meat, even by the United Nations. The future food for a growing world population.

In the Western world there is a cultural reluctance to eating insects, but also a cautious curiosity, and there is an increasing interest among scientists. In other parts of the world, such as Asia, there is a tradition to eat insects, and some species are regarded as delicacies. Many insects also seem to have a high nutritional value. So far, people mainly catch wild insects, but rearing them is emerging as a way to meet the growing demand.

Crickets are prized as food and they also seem to be quite easy to rear. Today crickets are usually reared on chicken feed, and this production has limited environmental benefits compared to chicken production, since crickets and chickens grow equally well on this feed. Also, this feed is too expensive for poor people, and its nutritional value is so high that people could just as well eat it themselves.

To be a climate and environmentally smart food, crickets have to be reared on feeds that have little value in other kinds of agricultural production, such as residues or weeds, and they must be cheap enough for poor people. Scientists know that many cricket species can feed on "a little of everything" but very few attempts have been made to rear crickets on residues, and none using weeds.

What Anna Jansson and her colleagues now show is that there are weeds and residues that perform as well as chicken feed for the Cambodian field cricket. Now their recommendations are passed on to people who want to rear crickets in Cambodia.

A number of Cambodian weeds and various residues from agricultural and other food production were tested in the study. Today these commodities are available for free or nearly free, which means that even very poor people would be able to rear crickets, at least to cover their own family's needs. The best ingredients were cassava tops and the weed Cleome rutidosperma (Fringed Spider Flower or Purple Cleome), both of which could be used as a single ingredient cricket feed.

Background to the project
Cambodia is one of the world's poorest countries. It is estimated that 40 percent of Cambodian children under the age of 5 suffer from malnutrition, which inhibits both their physical and mental development. The Swedish University of Agricultural Sciences has for many years run Sida-funded PhD projects in developing countries, and this project is one example.

Press images (may be published without charge in articles about these findings, please acknowledge the photographer).