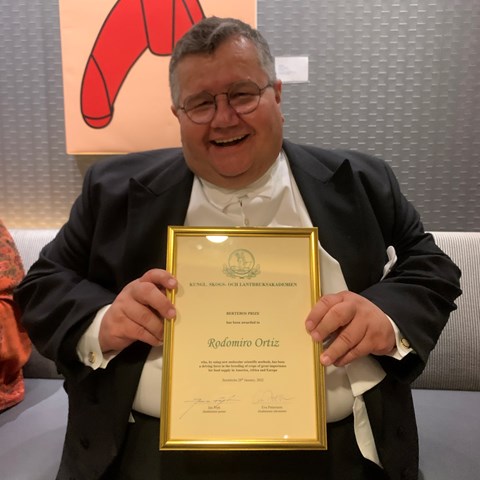 On 12 June, Professor Rodomiro Ortiz received the Bertebos Prize 2022. The prize is awarded every year by the The Royal Swedish Academy of Agriculture and Forestry (KSLA) to a person of outstanding merit who is conducting internationally pioneering research and development in food, agriculture, animal health or ecology. Read below an interview with Rodomiro and learn more about his research, the prize and how we will celebrate with him at SLU.

Our warm congratulations, Rodomiro for receiving the Bertebos Prize! The motivation from the jury reads: "To Professor Rodomiro Ortiz Ríos, who, by using new molecular scientific methods, has been a driving force in the breeding of crops of great importance for food supply in America, Africa and Europe."
What research methods are they referring to?

I will give some examples of crops that we have been breeding and why the Bertebos Prize 2022 acknowledge this research outputs.

DURUM WHEAT:
The Bertebos Prize 2022 was awarded for our achievements in breeding small grain cereals (e.g. durum wheat for pasta or couscous), for food and health promotion, and with special emphasis on reduced environmental footprint aspects. The research partnership of SLU with several international research institutes* used genetic tools and methods to identify DNA regions associated with heat tolerance in durum wheat elite lines that were exposed to a north south heat gradient in Northwest Africa. A number of the sections in the DNA regions from different durum wheats were investigated under severe heat stress. The ones showing consistency among these were validated with a specific technology for further use in of durum wheat in heat-stress prone environments. The most important achievement of this development research enterprise involving crossbreeding has been without doubt the release of three durum cultivars in Senegal, which are known as ‘Amina’, ‘Haby’ and ‘Dioufissa’.

COOKING BANANA:
We** have been assessing the efficiency of ploidy manipulations (scaling up and down chromosome numbers) and multi-site trial testing over cropping cycles (i.e., several years) for breeding cooking banana hybrids for the Great Lakes Regions of Africa. The best hybrid was about 250% superior to its grandparent in terms of bunch weight. Multisite testing across years in Uganda and Tanzania confirmed the outstanding performance of these hybrids that are known by the acronym NARITA in Uganda and TARIBAN in Tanzania. The sensory characteristics of the hybrids were closest to those of the local matooke cultivar for taste, aroma, mouth feel, color, and overall acceptability.

POTATO:
SLU has been running Svensk potatisförädling for 1.5 decades because developing new cultivars remains as a powerful approach to increase both the quantity and quality of potato harvest per land unit. This breeding programme plants about 30–40 bi-parental (having traits or characteristics that stem from both parents) family offspring for testing every year in Skåne and Norrland and does research on improving the efficiency in the genetic enhancement of potato.

Results from multi-site testing demonstrated that potato breeding based in Scandinavia offers cultivars to the growers of the Nordic Region of Europe for prevailing farming environments and end-user needs rather than relying, as happens today in the market, on foreign cultivars. Indeed, the annual genetic gains for tuber yield and flesh’s starch content for potato breeding in Europe since the 1800s were low, thus telling that the realised genetic gains of foreign cultivars are small in the Nordic testing sites. The high-tuber yielding SLU 1314015 was rated among the best breeding clones and is highly resistant to late blight, thus being advanced in the cultivar released pipeline for further trials in the country.

At SLU we are also exploring the use of drone imagery for high throughput phenotyping the assessment of expressed traits – a vital process in crop improvement programmes – and predicting tuber yield and hope to get funding grant to research if cultivar releases over time affect the related microbiota.

SWEET POTATO:
We have also been co-publishing journal articles with Centro Internacional de la Papa (CIP) colleagues on sweetpotato breeding including an accelerated scheme, selection in drought-prone environments and the release of cultivars showing orange and purple flesh or apt for being used as dual purpose (food/feed) in Mozambique and beyond in southern Africa. 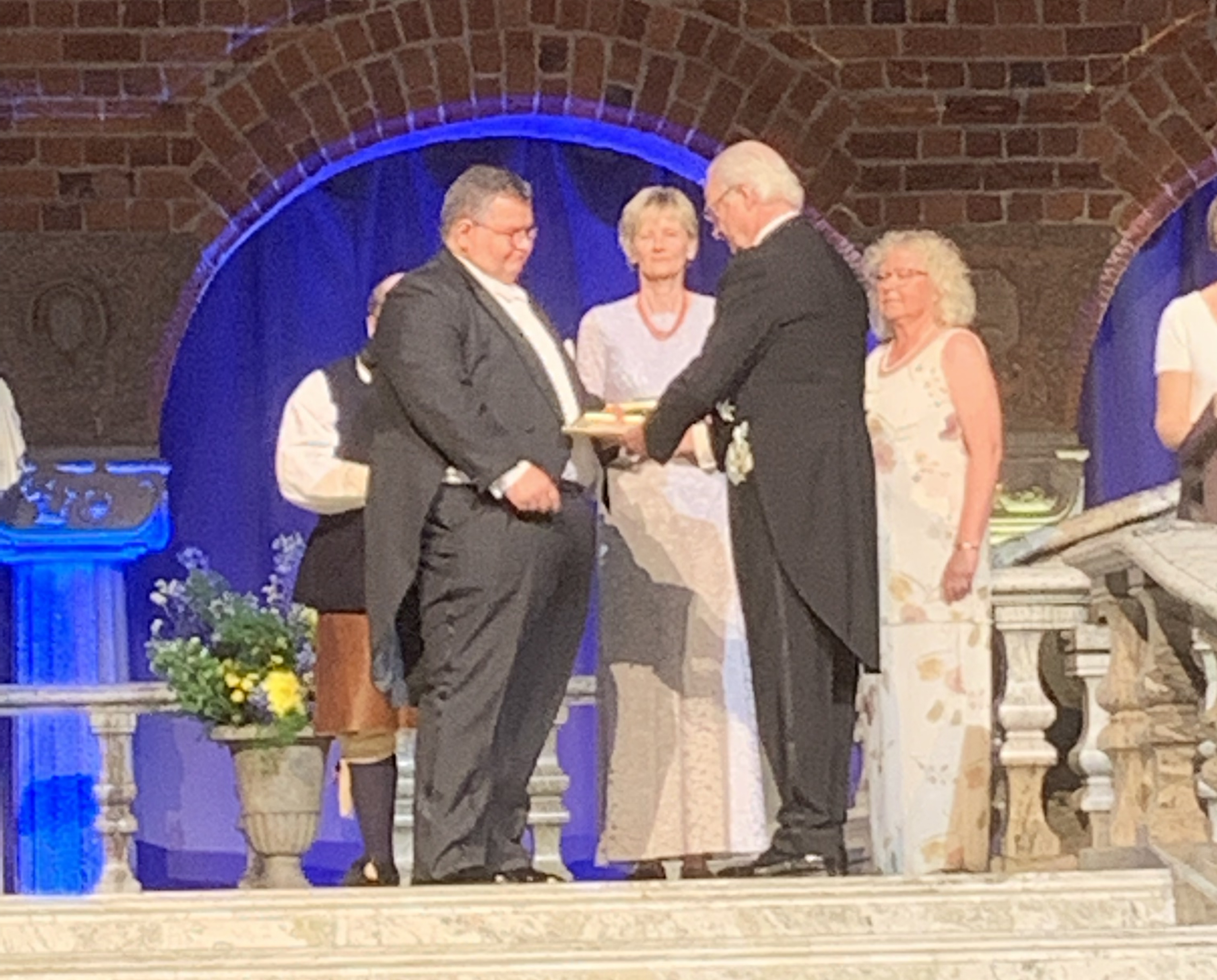 How can farmers benefit from your research?

Let’s use the potential impact of the newly released durum wheat cultivars for the Senegal River Basin as an example. They may yield between three and six metric tons (MT) of grain per ha (depending on soil type and temperatures), and with a fast cycle of just 92 days between planting and harvest. This discovery, if properly supported, has the potential to replace the fallow period between rice seasons with a productive durum wheat crop. Calculations based on the lowest recorded yield and the FAO measured 200,000 ha of irrigated rice land cultivated in Mali, Mauritania, and Senegal, estimate that up to 0.6 million MT of new food could be generated without affecting the current cropping cycle. Since high quality durum wheat grains are traded on the international market at € 300 to € 400 per MT, approximately 30% higher than top quality bread wheat, and up to 70% higher than low quality ones, this outcome could be converted into a significant new agri-food business of over € 180 million per year.

In what ways can your research support farmers to face the risks associated with climate change?

We can illustrate how our research support farmers using our development partnerships in Mauritania and Senegal, which are extremely famine-affected poor countries, ranking 55th and 44th in the Global Hunger Index and with a strong dependence on agriculture. Vast areas of these countries are desert or semi-desert, with precipitations not sufficient to sustain agriculture. Along the coastal area of the Atlantic, the precipitations during the wet season (June to October) allow for the harvest of drought tolerant crops, primarily millet. The most fertile region is along the Senegal River, which traces the border between the two countries, where the predominant crop is rice typically grown under flooded irrigation.

With the released durum wheat cultivars a double cropping is now possible, with a dry and hot season between October and June, and a wet season between June and October. As most of the farmers in the region depend on their fields to provide them with food, crop rotation can only be realistically practiced between food-crops. The rotation of rice-wheat appears to be feasible in the region. The introduction of high-yielding wheat cultivars would then provide an ideal complement to rice. Specifically, durum wheat can be grown with a smaller input of water than rice (500 mm instead of 1000 mm), it provides good straw for animal feeding (which is an extremely important trait for African farmers), it has a five–fold higher protein content than rice, it is ‘endemic’ of the regional diet, grain yields equal to rice are achievable, and it has also potential for rotation with millet in drought-prone rain-fed environments.

Global warming is expected to have a major impact on the northwest coast of Africa with a significant increase of temperatures. To cope with it, plant breeders will have to deliver to the farmers cultivars capable to maintain high yields under heat and drought. The traditional method of breeding has proven effective thus far, but with a significant loss in grain yield potential and general agronomical performances. In order to meet the growing food demand of the ever-increasing world population, a more drastic plant breeding approach would be needed; using methods such as some of those described above.

Even before the war between Russia and Ukraine we knew that global food security is a challenge. Now we have become very aware of how much of the world's wheat supply depends on these two countries. Wheat is also consumed to a large extent on the African continent. A recent UN report shows a sample of 25 African countries that rely on wheat imports from Russia or Ukraine.

How can your research contribute to a more food secure future for people in Africa and in low-income countries in other regions?

The deployment of high-yielding, stress-resilient cultivars with well-adapted performance, in combination with improved agronomical practices, are key in any strategy to reduce famine and poverty in many countries in the Global South, which are also affected by global warming due to the changing climate. Plant breeding also increases steadily crop production from existing farmland (i.e., sustainable agriculture intensification), thus contributing greatly to a bio-based economy. Crops can achieve both yield increase and stability through plant breeding.[i] Yield potential and stability can be enhanced through direct genetic gains for this trait and by improving host plant resistance to target pathogens and pests. Adaptation to stressful environments will enhance resilience of crops. Likewise, bettering the quality and safety of food could be among achievable plant breeding aims. The genetic enhancement of crops can reduce or eliminate undesired toxic molecules or lead to cultivars showing preferred nutritional traits. Feed composition will allow both reducing grazing lands and minimizing methane gas emissions. The built-in traits of feedstock sources for bio-based materials may be also changed through plant breeding.

Will there be a celebration at SLU connected to the prize as well?

On 26 October 2022 at Alnarp, the Royal Swedish Academy of Agriculture and Forestry (KSLA) will be holding an international conference on plant breeding research. The organizers and co-chairs are Emeritus Professor Roland von Bothmer (SLU/KSLA) and Anders Nilsson (KSLA). The host of this public event is SLU’s Department of Plant Breeding. The talks will be related to examples on how plant breeding contributes to UN’s Agenda 2030 and in particular to Sustainable Development Goals 2 (Zero Hunger), 3 (Good Health and Well-Being), 13 (Climate Action) and 17 (Partnerships to Achieve the Goals).

Programme and registration: Plant Breeding – The key to food security and improved foods

Thank you Rodomiro and good luck with your future research!

Together with other colleagues he defined the core subsets for genebanks holding quinoa, groundnut (or peanut), cowpea and yams, and elaborated the concepts of core selector with dryland crops and mini-core based on chickpea genetic resources, which are still used in germplasm enhancement or pre-breeding.

Since 2011, Ortiz has been chair professor of genetics and plant breeding at SLU's Department of Plant Breeding, where he manages the Plant Breeding Division of about 50 staff including professors, docents, researchers, postdocs, PhD students, and research assistants. Since 2021 he is the chair of SLU’s Breeding Network.

The Bertebos Prize is an international scientific prize awarded by the The Royal Swedish Academy of Agriculture and Forestry (KSLA). It was instituted in 1996 by Brita and Olof Stenström as a means of promoting education and research in the food chain.

The prize consists of SEK 400,000 and a diploma and is usually presented at the Commemorative Meeting of the Academy on 28 January; however, due to the pandemic, this year the prize was awarded on the 12 June 2022. During the year of the award, KSLA organises communicative activities together with the prize winner and in dialogue with the Bertebos Foundation. This year, there will be a scientific conference on breeding in Alnarp on the 26 October 2022.

Here is a recording of the Bertebos Prize ceremony 2022.

The Impact on Trade and Development of the War in Ukraine. UN report