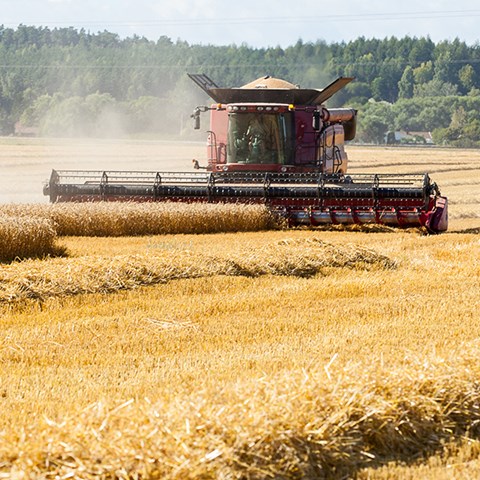 Farm vehicles are becoming so heavy that they jeopardize future food security in Europe, America and Australia. Larger and more flexible tires have limited the damage on the surface, but below the topsoil, the soil is becoming so compact that its long-term production capacity is threatened. These conclusions are made in a new global study, which also draws parallels to the sauropods, the heaviest animals that ever walked Earth.

The study, which was published in the Proceedings of the National Academy of Sciences (PNAS) yesterday, was conducted by Professor Thomas Keller from the Swedish University of Agricultural Sciences (SLU) and Agroscope in Switzerland, and Professor Dani Or from ETH Zurich in Switzerland and the Desert Research Institute in the USA.

Mechanization has greatly contributed to the success of modern agriculture, with vastly expanded food production capabilities achieved by the higher capacity of farm machinery. However, the increase in capacity has been accompanied by heavier vehicles that increase the risk of subsoil compaction.

While the total weight of laden combine harvesters could be around 4 tonnes in the late 1950s, we can today see modern vehicles weighing 36 tonnes in the fields, and the researchers behind the present study decided to investigate what this development has meant for arable land. The contact stress on the soil surface turned out to have remained constant at a low level during this period, which is due to the fact that the machines have been fitted with ever larger tires that distribute the weight over a larger surface. In the deeper soil layer, the subsoil, on the other hand, soil compaction has increased to levels that jeopardize the soil's ability to produce food. This also has consequences for the soil's ability to transport water and provide other important ecosystem services.

“Subsoil compaction by farm vehicles is a very serious problem, since once soils are compacted, they remain damaged for decades. This may be one of the reasons why harvests are no longer increasing and why we are now seeing more floods than before”, says lead author Professor Thomas Keller, from SLU in Sweden and Agriscope in Switzerland.

The researchers have also produced a map that shows how the risk of chronic subsoil compaction varies around the world and the risk turned out to be greatest in Europe, North and South America and Australia. Globally, about a fifth of all arable land is estimated to be at risk of far-reaching damage that is very difficult to repair. In other words, the chance that these soils will recover is small.

The risk is presently smaller in Asia and Africa, where the mechanization of agriculture has not reached the same high level yet.

“If the mechanization were to gain momentum in Asia and Africa, however, there is a risk of subsoil compaction also on these continents”, says Thomas Keller.

To contribute to more sustainable agriculture, vehicle manufacturers need to be more concerned about the risk of subsoil compaction and its negative impact on the soil.

“Above all, the wheel loads of modern farm vehicles need to be reduced in order not to affect the subsoil to the same extent as today. The heavier the machines, the worse for the subsoils”, says Thomas Keller.

“No one seemed to have wondered whether dinosaurs induced subsoil compaction, but since the sauropods were as heavy as modern farm vehicles, we thought this was a question that ought to be explored”, says Thomas Keller.

Like humans, sauropods depended on the soils ability to provide food, suggesting that they moved across the landscape in a way that reduced the risk of soil compaction. One possibility is that they restricted their movements to fixed "foraging trails" and grazed plants next to them with the help of their long necks. In this way, they could ensure that the surrounding land continued to produce the plant food they needed.

The article in PNAS

More about the study

• The researchers analysed the historical development of farm vehicle weights and tire equipment, and calculated how this has affected the pressure at the ground surface and deeper down in the subsoil.

• The researchers compared the relationship between weight and contact area (animal footprint and tire-ground contact) for farm vehicles and animals, including sauropods, and calculated soil pressure for living animals, sauropods and farm vehicles.

• Data used to estimate the risk of soil compaction related to degree of mechanization in agriculture, average size of tractors, soil properties and climate.