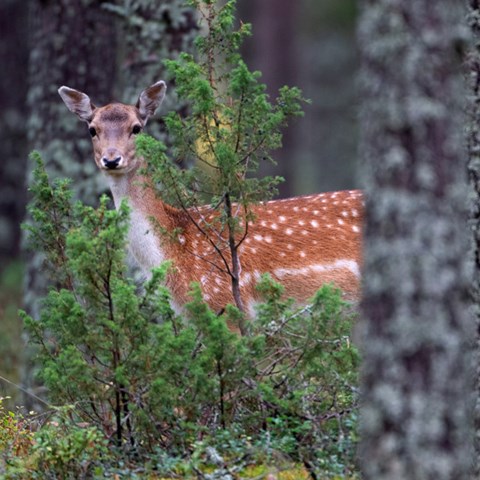 Ticks thrive on fallow deer, which is part of the transmission chain of bacteria that can cause tick fever in humans and livestock. Photo: Jörgen Wiklund, SLU

There is a great variation among different ungulate species in their importance in the spread of the tick-borne diseases Lyme disease (borreliosis) and tick fever. Fallow deer, moose and red deer are of great importance for the spread of a type of tick fever which can be dangerous for both humans and livestock. Wild boar, on the other hand, spreads hardly tick fever or Lyme diseases. This is shown in a new thesis from SLU.

Ungulates are often seen as important hosts for ticks, and are thus considered to play a large role in the spread of tick-borne diseases. But there are big differences among the ungulate species, both in their morphology and behaviour. For example, a moose is much larger than a roe deer, and while fallow deer live in large herds, moose live mostly alone. These, and other, differences may affect the number of ticks these animals have, and what role they play in the spread of tick-borne diseases.

In a new thesis from the Swedish University of Agricultural sciences, five ungulate species have been studied for their role in the spread of Lyme disease and tick fever. The number of ticks has been counted on 131 fallow deer, 30 roe deer, 61 red deer, 15 moose and 87 wild boar, during hunts in Södermanlands, Stockholms and Östergötlands county. Subsequently, both ungulates and ticks were tested for two different bacteria: Borrelia burgdorferi, which causes Lyme disease, and Anaplasma phagocytophilum, which causes tick fever in livestock and humans.

The results show a big difference in how many ticks the different ungulate species have. Fallow deer had the most ticks, while wild boar had hardly any ticks.

– The differences in the number of ticks influences how important the different ungulates species are in the spread of infection. Since wild boar had hardly any ticks, they are not as important for the spread of tick-borne diseases in general, says Nannet Fabri, doctoral student at SLU. The sheep tick (Ixodes ricinus) is a tick species that waits in the vegetation until a host passes by. Photo: Tim Hofmeester

Different ungulate species – different roles in the spread of infection

When it comes to Lyme disease, the infection itself is not spread via ungulates. Deer species contribute to the survival and distribution of ticks through their role as host animals for adult ticks.

– My research shows that importance of not considering all ungulates as one homogeneous group, but to study the species individually in research on ticks and tick-borne diseases, says Nannet Fabri

Nannet Fabri defends her thesis “Ticking of the ungulte box – the role of different ungulate species in the transmission of tick-borne pathogens” on Friday the 1st of April at 09.00 at SLU in Umeå.