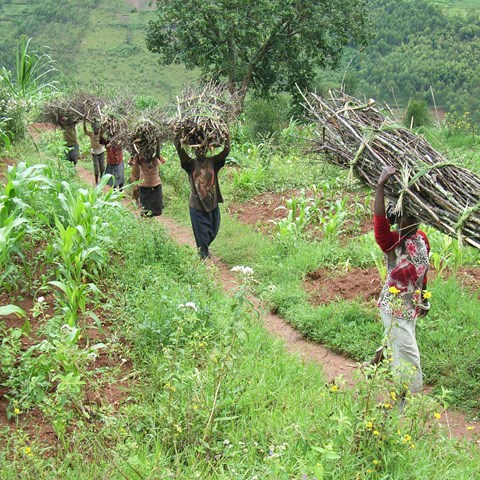 Women and children are often the ones collecting firewood for cooking, which is a time consuming task. Photo: Ylva Nyberg

Large rainfall variability is common in East Africa. Smallholder farmers are relying on rainfed agriculture. This makes them particularly affected by the variability and therefore they need to adapt their farming systems accordingly. This research examined the use of adaptation and coping measures among smallholder farmers and their rated perceived effectiveness.

The difference between adaptation measures and coping measures are that adaptation measures can help to avoid challenges, and coping measures are often done non-voluntarily due to lack of alternatives. When conducting the questionnaire survey, we choose smallholder farmers according to three criteria. First, we had equal number of men and women farmers as we were interested in the effects of gender on adoption. Secondly we had smallholders representing two different geographical areas. One with less severe, and one with more severe effects from rainfall variability. Lastly we separated the results for farmers whom had been having regular access to farming system advisory services for several years and compared them with farmers whom had only been having sporadic access to advisory services (from now on called trained respectively non-trained farmers). In the survey we were also interested in the limitations to adoption of measures. In total, 80 smallholder farmers were interviewed.

The results showed that:

Women who often have less formal education, less power over land and economic resources, and by tradition more home bound duties (farm, food, firewood, children) than men, will need special solutions for accessing advisory services. To overcome the limitations for adoption of measures, advisory services (knowledge) should be combined with labour saving techniques or simple mechanisation in combination with microfinance services for both saving and lending money for investments. Thus advisory services and policy interventions can play important roles in future efforts to improve adoption of measures, especially for women.

“Women are often eager to learn and absorb new knowledge, but they are hard-working and it is difficult to get their time" says Ylva Nyberg, one of the four SLU researchers who conducted the investigation.

This study was made possible by the Swedish Ministry for Foreign Affairs as part of its special allocation on global food security, the Swedish Research Council Formas, the Swedish International Development Cooperation Agency programme on ‘Sustainable development in developing countries’ (220- 2009-2073) and the Swedish University of Agricultural Sciences (SLU).