Claudia Köhler chosen to be a Wallenberg Scholar 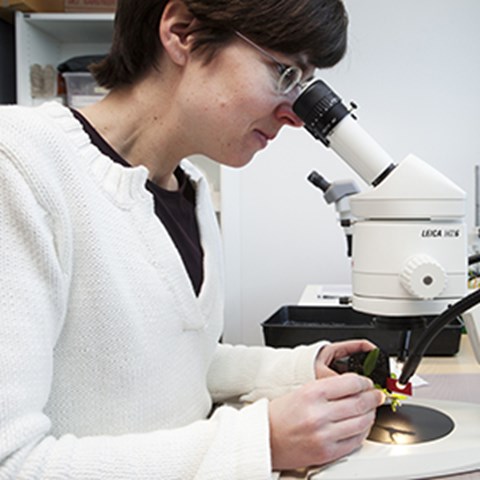 The Wallenberg Foundation has chosen 22 excellent researchers to be Wallenberg Scholars, which means that they receive SEK 18 million each for free research during five years. One of them is Professor Claudia Köhler at SLU's Department of Plant Biology in Uppsala.

Claudia Köhler's research concerns genetic and epigenetic mechanisms governing seed development and plant speciation. Her research group focuses on the endosperm, the tissue that supports embryo growth and is functionally analogous to the placenta in mammals. They decipher the role of the endosperm in controlling seed growth, regulating embryo development, as well as establishing barriers towards interspecies and interploidy hybridizations. Their main model is Arabidopsis thaliana, but they work as well on close relatives like Capsella, Arabidopsis lyrata, and Arabidopsis arenosa. While their main focus is on basic research questions, they also strive to translate their research into practical applications. As a Wallenberg scholar she will focus on a project concerning "jumping genes":

"Jumping genes" are DNA sequences that move from one location in the genome to another, and in doing so they can change or destroy genes. Claudia Köhler is studying how plants guard against movements of this kind, thereby helping to conserve species. The project involves basic science, and also offers potential for simplified plant breeding.

"Jumping genes", or transposons, as they are also known, were discovered by Barbara McClintock as long ago as the 1940s. She later received the Nobel Prize in Physiology for this work. McClintock studied corn, but several decades later transposons were also discovered in other organisms. Transposons are DNA sequences that can changes places in the genome. In practice, this threatens the existence of the organism in question, since it affects the activity of other genes. Organisms have therefore evolved various mechanisms to protect themselves, including small RNA molecules that can recognize and destroy transposons.

In animals, these molecules belong to a class called piRNA, and the process has been found to play a key role in conserving species. Specific piRNAs are formed in the sex cells of females. These normally recognize and destroy transposons derived from the male. If the transposons cannot be recognized, which may be because the male belongs to a different species, they are not destroyed. The transposons are then activated, causing sterility. So there will be no offspring, and no hybridization – the species retains its identity.

Köhler's research has shown that small RNA molecules help to conserve the integrity of plant species as well. She is working with a type of molecule called easiRNA, and intends to find out whether they protect plant sex cells from being invaded by transposons in the same way that piRNAs do in animals.

Two species are being studied in the project: thale cress (Arabidopsis thaliana), and pink shepherd's purse (Capsella rubella). To this end, Köhler and her colleagues are using mass sequencing and new genetic and bioinformational tools that they have developed. The plan is to study when, where and how easiRNAs are formed, and how they suppress transposons. This is a matter of basic science, in which the findings may show whether easiRNAs and piRNAs have had the same function over the course of evolution. But this new knowledge may also yield benefits for plant breeders, for whom the difficulties involved in hybridizing species have posed a major challenge. Better understanding of the obstacles may pave the way for new tools and methods.

Wallenberg Scholars is a program designed to support and encourage some of the most successful researchers at Swedish universities.

"We want to give Sweden's foremost researchers an opportunity to freely explore their ideas without needing to worry about funding. We believe that supporting the individual researcher's drive, and giving researchers the opportunity to organize research in the way they themselves consider to be the most effective benefits the scientific process, and can lead to unexpected breakthroughs," says Göran Sandberg, Executive Director of the Knut and Alice Wallenberg Foundation.

Researchers are nominated by universities, after which their project descriptions undergo peer review, carried out by international scientific panels, which identify the projects that have high international potential, and that may be considered for a grant. The Foundation's Scientific Advisory Board then compiles the evaluations received and submits recommendations to the Board for its decision.