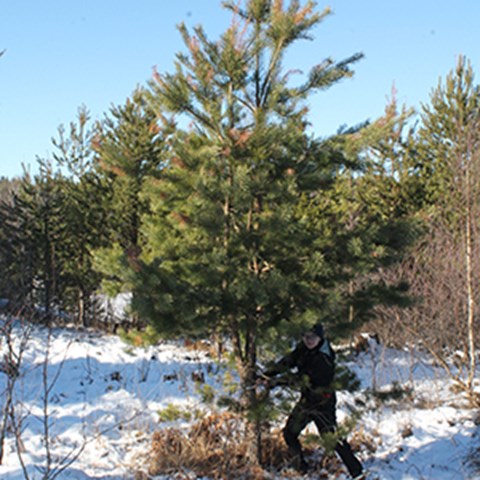 The pine pathogen Diplodia sapinea earned infamy overnight in 2016, when it was first exposed as the causal agent of a larger disease outbreak in a Swedish pine forest. In a new study, researchers from SLU and several other European universities show that in particular fast growing, thirsty pines in drought-stressed stands suffer from attacks. The damage may however be mitigated if discovered in time.

In August 2016, SLU researcher Jonas Olivà stumbled upon the first known outbreak of the forest pathogen Diplodia sapinea in Sweden, in a 15 hectare pine stand outside Arlanda. The damages were striking, with 9 out of 10 pines severely attacked. Fruiting bodies from D. sapinea had been found all over southern Sweden already in 2013, but only very limited symptoms. It has since been assumed that something inhibits larger outbreaks during Swedish conditions. Olivàs finding in 2016 clearly showed that reality, as so often, is more complicated than that.

In a new study, Olivà, along with Professor in Forest Pathology Jan Stenlid, and researchers from several other European countries investigate the factors permitting the outbreak outside Arlanda. Laura Brodde at the department of Forest Mycology and Plant Pathology at SLU is the first author of the study.

No invasion of more aggressive individuals

"Our initial suspicion was that a more aggressive type of the fungus had been introduced to Sweden", Laura says. "We investigated this by using DNA-technique to study fungal genotypes from the area of the outbreak, and compare this to genotypes found in Sweden previously."

Lauras results showed that D. sapinea clones found in the attacked area did not differ from other clones found in Sweden previously. The most commonly present genotype in the outbreak area was found already in 2013, when it did not cause any greater damages. This makes it unlikely that the attack in 2016 was caused by a recent introduction of a particularly virulent type of the fungus.

Within 5 km from the outbreak, attacked trees could be found sporadically in half of the investigated stands. This frequency dropped to one in ten between 5 and 30 km from the outbreak. This diminishing gradient suggests that the disease has spread outward from the outbreak area rather than that new outbreaks occur in many places simultaneously. It is unclear what this means for the origin of the fungus in the attacked stand. It is conceivable that the trees were already infected while being planted. Reports on D. sapinea in Swedish nurseries occurred as early as in the 1960's, but not in recent years.

Drought in May increases damages

"D. sapinea may lie dormant in host trees for a long time without damaging them, only to develop disease symptoms once the circumstances are beneficial", Laura says.

The fungus has for example been assumed to benefit from high temperatures and drought, as this stresses the trees and lowers their resistance. Thus, Laura and her colleagues investigated the impact of weather on the level of disease in the area.

"The fungus attacks and kills first year shoots", she says. "This causes bifurcated stems, split in several tops. By counting the number of year shoots since the split, we can estimate which year the damage occurred. If this is done at stand level, we get a view of which year the attacks were most severe. By correlating this to weather data, we could investigate the link between temperature and attack. We also compared this to yearly growth".

Laura stated that the attacks had been going on since 2007, and that the frequency had increased every year. In 2013 and 2016 the attacks were especially severe, with more bifurcations and decreased growth. These years, the warmth and drought in May were especially high, which may have caused drought stress and made shoots sensitive to attacks.

In the attacked area, severely damaged trees were found standing next to trees virtually free of symptoms. This suggests that not only the drought and the heat, but also tree physiology, impacts the outcome of a Diplodia-attack. Thorough studies allowed Laura to learn that those trees that fared best, had several traits in common.

"We could see that trees whose life style demands a greater supply of water are more sensitive to attack. We could also see that trees with higher concentrations of soluble sugar and starch are more resistant. These factors are linked to each other."

Trees that consume a lot of water generally grow faster, and thus have less available sugar. This can be seen as the trees being wasteful; all resources are invested into growth, longer shoots and wider annual rings. But when such trees run out of water, they cannot sustain their expanded tissues, which suffer from drought. Since they also have less available sugar, they have less energy for their resistance. Apart from the higher growth rate, this sugar shortage may also be caused by the fact that these trees are more heavily attacked, and thus have lost much of their photosynthetic tissues.

Long build up before break out

Jonas Olivà has formulated a hypothesis regarding the causes of the outbreak in 2016.

"We believe that D. sapinea is widespread in Sweden, but that reoccurring lesser attacks during several years might be needed to accumulate a sufficiently large inoculum to cause greater damages", he says. "This occurred between 2007 and 2016 outside Arlanda. At the end, the amount of spores was high enough in the stand to cause severe damages when the opportunity arose, which it did in spring 2016. Warm weather caused drought, and those trees that use the most water, that grow fastest and retain the least resource, are the most sensitive to this drought. These were the trees that succumbed to the outbreak."

In the light of this, the outbreaks should have appeared all over the place in 2018, the driest summer in ages.

"And they did, on the island Gotland", Jonas says. "On Gotland, it was dry already in May, when the sensitive shoots elongated. But in the rest of the country, the drought didn't strike until in June, when the shoots were already fully grown and no longer susceptible to attack. In April and May, the snow still remained, which made sure there was water in the ground even though it did not rain."

Precautions may be taken

Diplodia sapinea has the potential to cause wide spread damage in Sweden; no factors constitute a permanent obstacle to its spread. Large outbreaks occur after drought, but probably not unless a large inoculum has been established first. This appears to happen over several years, which is why an important measure for forest owners could be to manage damages at an early stage and promptly remove infected branches. The symptoms may easily be mixed up with Gremmeniella and Melampsora pinitorqua, which may be a reason they are sometimes overlooked. Forest owners are advised to learn to recognize symptoms and send samples of damaged trees for analysis.

This project was funded by two grants to Jonas Olivà from the Swedish research council FORMAS. Laura Broddes PhD-position is also funded by a grant from FORMAS, to Jonas Olivà and Professor Jan Stenlid.

(May be published without charge in articles about this press release, please acknowledge the photographer)

Diplodia sapinea have spores that are larger and heavier than many other spores, and are less easily spread by wind. Photo: SLU

The fungus infects healthy pine needles during their first growing season. Young, planted trees are affected the most. Older trees are rarely attacked unless stressed.

The disease is known to afflict trees weakened by drought stress, damaged roots, lack of soil nutrients, growth in shadow, weather damages such as wind, hail and snow, and damages caused by insects. D. sapinea causes resinous, bleeding wounds on stems and branches which may kill the tree, especially when occurring on the lower branches. The resin from the stem wounds may cause infected needles to stick to other parts of the tree once they are shed, which can lead to new infections. The most apparent sign that a tree is infected is the death of year shoots and apex shoots, or brown, stunted shoots with brown, stunted needles.