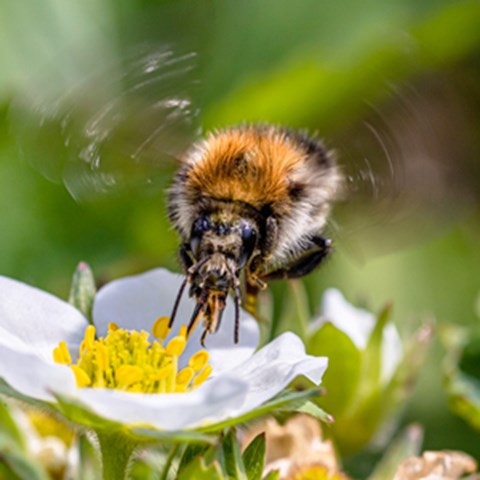 A biocontrol fungus has been demonstrated to decrease gray mold substantially in strawberry plants when vectored by bumblebees. This led to improved shelf life of the harvested strawberries with almost 100%. Making new potent biocontrol agents available for further development is important because few sustainable methods currently exist to combat gray mold.

Gray mold caused by the fungus Botrytis cinerea is one of the most devastating diseases of many crops, including strawberry, where it can reduce the shelf life considerably. Gray mold is typically controlled by spraying synthetic fungicides. However, environmental and political concerns worldwide call for chemical pesticides to be replaced by more sustainable methods. In addition, chemical control frequently results in the evolution of fungicide resistance in the pathogen, something that makes the products less efficient.

– We investigated the potential of the yeast-like biocontrol fungus Aureobasidium pullulans to inhibit Botrytis cinerea and thereby increase the shelf life of the harvested strawberries. Bumblebees were used to deliver the biocontrol agent, says Johan Stenberg, one of the researchers behind the study.

Using bumblebees as vectors of various biocontrol agents is becoming increasingly popular. However, potentially negative effects on bee performance have not been much studied.

– Our results show that, over the four-week period of the trial, the performance and activity of the bees were not negatively affected by A. pullulans. The bees successfully picked up the powder formulation, then they carried and deposited it on the flowers, says Mudassir Iqbal, another author of the research article.

Letting bumblebees deliver the biological control agent during flowering significantly reduced gray mold development on the harvested fruits by 45% and increased shelf life by 100% in comparison with control treatments.

– The bee-vectored application of the biocontrol agent was found to be significantly more effective than spray application because the latter may temporarily increase humidity around the flower, thereby creating a suitable environment for the pathogen to thrive, explains Matilda Jützeler, who wrote her master thesis as a part of this study.