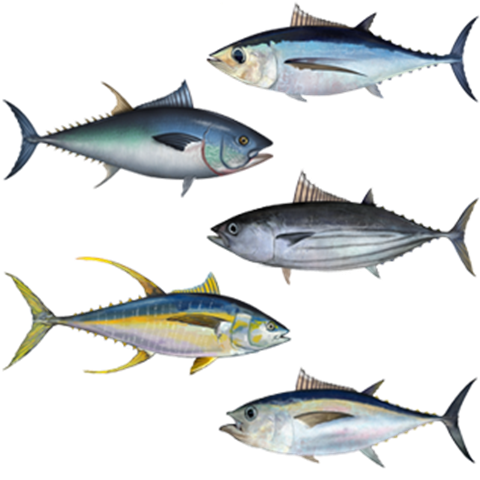 Oceanic resources, in particular fisheries, are among the most important renewable resources around the globe. As population density and economic activity in the coastal zone are expected to increase in the next decades, the impact of global warming, pressures on coastal ecosystems, including fish species, will also increase. SLU participates with scientific expertise in regional fisheries management organizations around the globe through the Global Program at the Swedish Agency for Marine and Water Management.

In the Indian Ocean region, the Indian Ocean Tuna Commission (IOTC) is the body responsible for the management of tuna and tuna-like species. These species are an important food source, and, due to their high economic value and extensive international trade, they are also important global commodities. IOTC ensures the conservation and sustainable utilization of tuna and tuna-like species in the Indian Ocean through the implementation of the ecosystem approach to fisheries. This approach has been championed by the Food and Agriculture Organization of the United Nations (FAO) since the 1980's. In fact, IOTC is a body that was formed under FAO in 1993.

In this context, The Swedish University of Agricultural Sciences (SLU) has been engaged in supporting sustainable global development around the world since 2015, participating actively in a range of working groups in different regional fisheries management organizations around the globe, within the Global Program, which is directly linked to the Sweden's Global Development Policy.

In autumn 2017, Dr. Massimiliano Cardinale from the Department of Aquatic Resources at SLU (SLU Aqua) participated as a scientific expert in several of the IOTC working parties, providing advice on tunas and billfishes, including important commercial species for European market (such as yellowfin and skipjack), but also on smaller coastal tuna species, which are vital for coastal communities in the Indian Ocean. The advice is used as basis for management actions aiming at the sustainable exploitation of fish resource and the ecosystem approach to fisheries management.

"Detailed, timely and high-quality information on fishing activities and catches are the keys to successful fisheries analysis and management initiatives", says Mr. Fiorellato – that joined IOTC in March 2016.

"One of the most challenging aspects of this work is ensuring that member countries fully understand the importance of the data they collect. As scientists involved in supporting data processes, we have to highlight that there are actual fishermen and their families, which will ultimately be affected by the accuracy of the scientific advice and the effectiveness of the management actions. For this reason, much effort is put into assisting developing coastal states in the implementation of the data reporting requirements through data compliance and support missions whose main purpose is to build or increase capacity at country level, and ensure that the quality of the information collected and submitted to IOTC reaches the best possible standards".

"The IOTC Scientific Committee plays a vital role in the management of IOTC fisheries." confirms Mr. Fu, who is also a relatively recent addition to the IOTC Secretariat staff having joined in November 2016. Mr Fu, who led the 2017 stock assessment of skipjack tuna also noted:

"as the stock assessments get more complex, we have to be increasingly careful to make sure that the advice from the Scientific Committee can be understood by the managers, and this is a very challenging aspect of our work".

Both Mr. Fu and Mr. Fiorellato together with Massimiliano Cardinale from SLU and many other scientists from EU and countries around the Indian Ocean will continue in the next years to work in order to provide the best advice for the sustainable exploitation of fish stocks and the marine environment in the Indian Ocean.