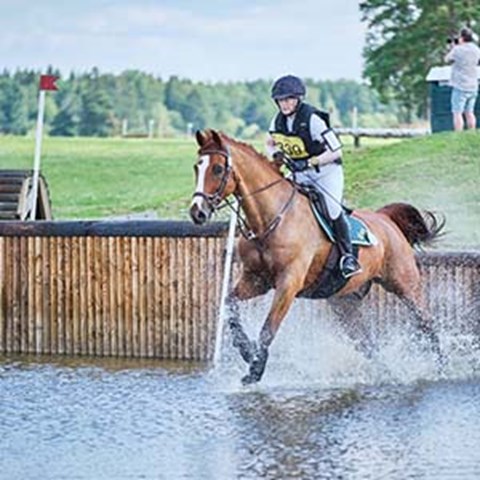 In horse breeding, selection for mobility may have increased the proportion of carriers for the lethal disease Warmblood Fragile Foal Syndrome (WFFS). Foals carrying two copies of the WFFS gene variant are not viable, but are aborted or euthanized immediately after birth. In warmblood horses, the proportion of the WFFS gene variant is higher than expected for a lethal disorder.

Our study shows a measurable effect on traits, including mobility, in horses carrying a single copy of the WFFS gene variant. However, performance is more complex and depends on many factors, both genetic and environmental. With a stricter selection against the WFFS gene variant, the carrier frequency can be reduced in the population without a negative effect on the breeding progress.

The hereditary and lethal disorder Warmblood Fragile Foal Syndrome (WFFS) is caused by a mutation in the PLOD1 gene. The gene encodes an enzyme involved in collagen synthesis and affect the production and function of connective tissues in e.g., tendons, ligaments, skin and blood vessel walls. The disease was first described in warmblood horses, but researchers have as well found carriers in other breeds, and an affected foal has been described in Thoroughbreds. Therefore, the disease will probably change its name to Fragile Foal Syndrome (FFS).

The majority of affected fetuses carrying two copies of the WFFS gene variant, are likely to be aborted already during pregnancy. Clinical signs in affected foals that are not aborted, include fragile skin, mucosal ulcers, hypermobility and hematomas. By using the available genetic test for the WFFS gene variant, breeders can avoid carrier-carrier mating, and thus completely eliminate the risk of having a suffering WFFS-affected foal. Having an affected foal leads to an emotional loss for both the mare and the breeder, and according to the Swedish Animal Welfare Act, it is illegal to cross two carriers of such a disorder. The breeder is likewise financially affected when the mare does not give birth to a live foal.

The WFFS gene variant was examined in SWB horses

The purpose of this study, in collaboration with the breeding organization SWB, was to investigate whether carriers of one copy of the WFFS gene variant, in some way, are affected. The proportion of WFFS carriers is unexpectedly high in warmblood horses, although inherited lethal disorders are usually not likely to increase in a population, unless they lead to some advantages. In our study, the frequency of carriers varied over the years and we did find WFFS carriers among SWB horses born already in the 1980s. Among 511 randomly selected SWB horses born in 2017, the frequency of WFFS carriers was estimated at 7.4%, which is slightly lower than in most other warmblood breeds where the frequency of carriers is on average around 10-11%.

Breeding strategies in the presence of a lethal disorder

Breeding organizations are obliged to manage, and prevent an increase in frequency of lethal gene variants. We therefore tested how the frequency of WFFS carriers could be affected by different selection strategies of breeding individuals, and if WFFS carriers have a selective advantage compared to non-carriers.

The frequency of carriers of a recessive lethal condition is expected to decrease by each generation and is rarely found to be above 1-2 % in a natural population. Despite this, our study shows that the frequency of WFFS carriers remains unchanged or even increases in a population similar to that of SWB, indicating an elevated selection of WFFS carriers. We also show that the proportion of carriers could be reduced relatively quickly by limiting the use of carrier individuals in breeding.

Further research is needed to find out how the WFFS gene variant will affect health, and sustainability of carriers in the long term. We also need to find out more about the genetic background explaining the horse's performance traits to find genomic tools for choosing healthy, sustainable and better performing horses for breeding.

Link to the publication

The study was funded by Formas, and the Swedish Norwegian Foundation for Equine Research.