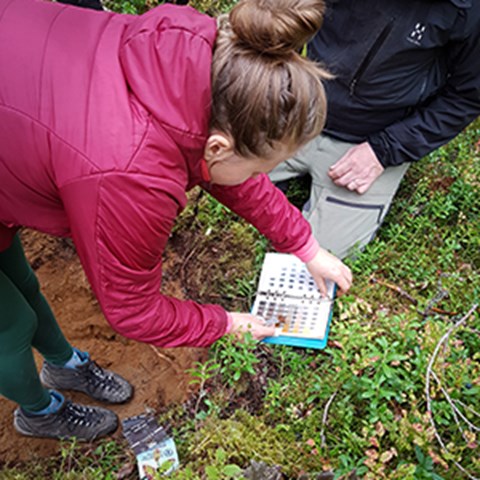 Broad, deep and up-to-date knowledge in soil science will probably increase in importance in the future. Photo: Jennie Barron.

To strengthen research capacity and get new knowledge on climate adaption and mitigation for agricultural soils, the current state of soil science in higher education in Europe is being investigated. A report has now been delivered with preliminary results from education institutions in Europe. The projects is done in the European Joint Partnership “Towards climate smart sustainable management of agricultural soils” (EJP SOIL) during five years.

The survey covered areas such as teaching and research capacity, academic topics and degrees offered, student enrolment, courses and learning approaches, internationalisation and diversity, and job market for graduates.

– A total of 86 complete answers from 25 European countries has been received so far, says Ana Villa Solis, one of the researchers behind the project.

Preliminary results showed that only 10% of the higher education institutions (HEIs) had a dedicated soil science department. Traditionally it has been more common with departments, or the like, where soil science was the only topic.

– From the answers of the survey it was seen that nowadays the majority of soil science is embedded in a department where environmental sciences, agricultural sciences and earth sciences are the main academic topics, says Ana.

Respondents reported an increased enrolment at Bachelor level (BSc), and no change for Master (MSc) and PhD level. Mixed trends could be seen for specific countries and universities, with both increases and decreases in student enrolment. Broad, deep and up-to-date knowledge in soil science will probably increase in importance in the future.

– At the same time, we have seen that two thirds of all responding departments says they have not made any changes in courses or curricula in soil science during later years. With low levels of renewal and with a clear dominance of traditional lecturing it is not obvious that HEIs in Europe will provide the skills in soil science that will be needed in the future, says Ana.

For example, at BSc level the proportion of courses that did not have any computer/modelling component was about 1/3. However, results also suggested that study programs are evolving to include more generic competences as well as active learning methods (e.g. problem-based learning, case studies) which enhance critical thinking or problem-solving skills needed to e.g. adress sustainability problems.

An increased interest in internationalisation

Even if MOOCs are one of many potential new forms of teaching, the low interest might implicate a low engagment in digitalisation and the new options within HE in Europe.

– A more detailed analysis of the results from the survey is ongoing and will be incorporated into the final version of the report due in July 2021, concludes Ana.