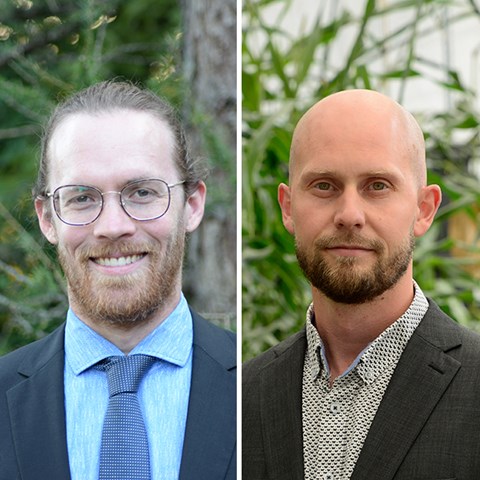 The grants from KAW are for research in the natural sciences, medicine, technology, humanities and social sciences, and there is huge variation among the issues being examined. With the help of five years of funding, these young researchers will investigate everything from how particles in the atmosphere affect the climate to the Bible’s role in the development of a secular Europe.

Derek Lundberg, who comes from the Max Planck-Institute for Developmental Biology, Tübingen, Germany, will be hosted by SLU's Department of Plant Biology in Uppsala. He will study the interactions between bacteria and plants, with the purpose of finding bacteria that can increase yields and reduce the need for environmentally harmful agricultural chemicals. To better understand how bacteria and plants interact, Derek Lundberg will investigate a group of bacteria called Sphingomonas, which thrive in leaves, roots and seeds. He will primarily study the relationship between Sphingomonas and barley, one of our most important crops, and with poplar trees, which are key in the production of fiber mass and biomass.

Simon Stael, who comes from the VIB-UGent Center for Plant Systems Biology in Belgium, will be hosted by SLU's Department of Molecular Sciences in Uppsala. His research will concern the healing process of trees and other plants that suffer physical damage. Simon Stael recently demonstrated that proteases, enzymes that split proteins, are activated when a plant called thale cress is damaged. To better understand how plants survive in tough conditions, he will now investigate whether other plants, including wheat, spruce and moss, have proteases that are activated when the plants are injured. The long-term aim is to better understand how plants function, leading to more sustainable agriculture and forestry.

The Wallenberg Academy Fellows Programme was established by the Knut and Alice Wallenberg Foundation in close collaboration with five royal academies and 16 Swedish universities in 2012. The universities nominate researchers for the programme, the academies evaluate the candidates and present the most promising researchers to the foundation, which then makes the final selection. Thereafter, the universities take long-term responsibility for the activities of the selected researchers.

“This year’s call was the eighth and, with this, the Foundation has funded 230 Fellows, of whom 46 percent are women. All applications are made in competition and the evaluation process only considers scholarly merits,” says Peter Wallenberg Jr, chair of Knut and Alice Wallenberg Foundation, in a press release from the foundation.

“Wallenberg Academy Fellows is a powerful investment in rejuvenating Swedish research. It provides young researchers with fantastic opportunities to become established and build up their research groups,” says Göran K. Hansson, secretary general of the Royal Swedish Academy of Sciences, in the same press release.

Funding amounts to 5 to 15 million Swedish kronor per researcher for five years, depending on the subject area. After the end of the first period, the researchers may apply for funding for an additional five years.