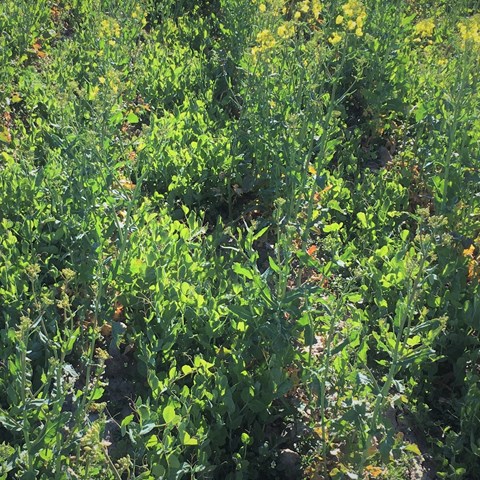 Winter oilseed rape intercropped with winter peas in a pilot experiment. The winter peas were sown between the rows of oilsed rape directly after a second mechanical weed control by inter-row hoeing, about six weeks after the oilseed rape was sown. This intercrop is one of several combinations that will be evaluated in the project. Photo: Georg Carlsson.

Georg Carlsson was has been granted funding from SLF (Swedish farmers’ foundation for agricultural research) for three years, where researchers from different SLU-departments and HS konsult will study intercropping winter oilseed rape with legumes. Oilseed rape is an important crop in Swedish agriculture, which generally generates good profitability. But oilseed rape is also sensitive to damages from e.g. slugs, fungal diseases and several insect pests, and relies on large inputs of fertilizers and weed control in order to reach high yields.

- In this project, we will test oilseed rape intercropping with with frost-sensitive legumes that die during winter and overwintering faba beans and peas that are harvested together with the oilseed rape at maturity, says Georg Carlsson.

The different intercrop combinations will be evaluated in terms of crop yields, abundance of weeds, diseases and pests, and nitrogen use efficiency. The results are expected to guide the development of more sustainable oilseed rape production from two perspectives: reduced dependency on fertilizers and pesticides in the intensive conventional production and increased yield stability in organic production.

The project group is composed of: