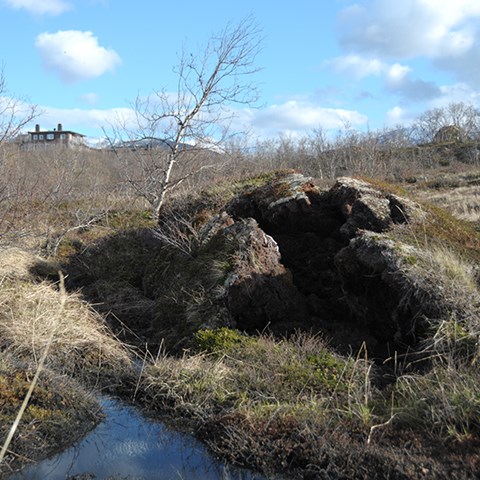 Estimations of carbon emissions from thawing permafrost largely rely on studies using native permafrost microbes. However, this may have led to large underestimations. A new study shows that topsoil microbes can cause much larger emissions when they colonise the permafrost. Behind the study are researchers from SLU, Umeå University and INRAE.

The international research team has been led by Sylvain Monteux from the Swedish University of Agricultural Sciences, SLU, and Umeå University, and Frida Keuper from the French National Research Institute for Agriculture, Food, and Environment, INRAE. Their study has been published in Nature Geoscience.

“After adding exotic microbes into permafrost soil, we observed the onset of nitrate production and a nearly 40 per cent increase in carbon dioxide emissions. This is a surprise we had not anticipated,” says Sylvain Monteux, postdoctoral fellow at the Department of Soil and Environment at the Swedish University of Agricultural Sciences, SLU, and former doctoral student at Umeå University.

Carbon emission from thawing permafrost poses a threat to remaining carbon budgets to keep global warming below 2 degrees Celsius. A key uncertainty in global climate projections is the response of soil microbial communities to permafrost thaw.

“It is often thought that in the world of microbes ‘everything is everywhere’ in terms of functioning, but for microbial communities in permafrost soils, this is apparently not the case,” says Frida Keuper, research fellow at the French National Research Institute for Agriculture, Food, and Environment, INRAE, ​​and former post doctor at Umeå University.

Due to the cold conditions at high latitudes, some parts of the ground are continuously frozen: the permafrost. And to microbes, permafrost soil is a hostile environment. Although microbial communities perceive this as stressful, they can still be frozen for thousands of years and somehow survive. At a community level, the frozen soil conditions seem to cause a strong natural selection.

Permafrost soils, much like a freezer, have preserved plant and soil material from decomposition over a very long time, and therefore now store as much carbon as is found in all plants on Earth and in the atmosphere together. Climate warming causes permafrost soils to thaw, which allows microbes to degrade the carbon. In doing so, the soils release carbon dioxide, methane and nitrous oxide – three greenhouse gases that further boost global warming.

The mechanism is referred to as the permafrost carbon-climate feedback and has been estimated to induce the emission of about 100 billion tons of carbon by 2100.

A large part of the data used to estimate permafrost carbon emissions relies on laboratory measurements of greenhouse gas emission from soil microbial respiration. The potential carbon release from permafrost is typically deduced by incubating permafrost in isolation from seasonally thawing topsoil.

In nature, however, microbes can migrate from the topsoil into the freshly thawed permafrost. Because of that, the research team explored whether adding diverse topsoil microbes to the incubations would affect the functioning of the permafrost soil. And adding exotic microbes allowed the microbial community to turn ammonium into nitrate, which the native permafrost microbes alone were incapable of. Furthermore, these exotic microbes increased the community’s carbon emissions by nearly 40 percent, which suggests that current estimates of future carbon losses from permafrost soil, based on soil with only native microbes, might underestimate the permafrost carbon feedback.

“Climate warming mitigation requires that we quantify natural climate change feedbacks. We need to know what our target is if our aim is to reach it. Understanding the mechanisms behind soil microbial responses to permafrost thaw is an important step toward this quantification,” says Sylvain Monteux.