Heirloom cultivars - from appeared relics to valuable crop production for the future? 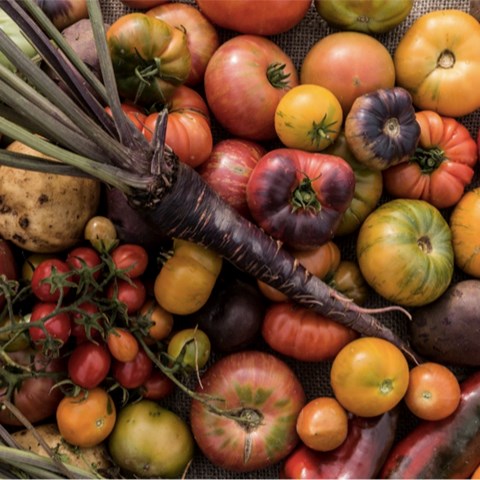 Diversity in fruit, root, and tuber size and color of heirloom cultivars of capsicum, carrot, potato, and tomato. Photo credit: University of Wisconsin—Madison College of Agricultural and Life Sciences

In a recent journal article, researchers has documented the unique characteristics of heirloom cultivars, such as productivity, stress tolerance, proximate composition, sensory quality, and flavor.

Heirloom crop cultivars are traditional cultivars that have been grown for a long time (>50 years), and that have a heritage that has been preserved by regional, ethnic, or family groups.

In modern cultivars the crop nutritional quality has been compromised by the emphasis on edible yield and through the loss of biodiversity due to the introduction of high‐yielding, uniform cultivars. As a contrast, heirlooms may offer a welcome alternative in certain markets.

New market channels have emerged for heirlooms and have re‐energized this unique repository of crop germplasm. As they possess unique flavors, colors, texture, stress tolerances, and forms, heirlooms may represent an important collection of traits that can be of immediate value in crop production and as a source of breeding germplasm for future cultivars.

The goal of the review has been to document some example of the unique characteristics of heirlooms, with the hope of further encouraging breeders to identify their useful exotic traits and introgress these traits into breeding programs aimed at developing high‐quality, consumer‐oriented cultivars.

Read more in the article: Pursuing the Potential of Heirloom Cultivars to Improve Adaptation, Nutritional, and Culinary Features of Food Crops (PDF)