“Together we stand”: aquatic plants help each other endure stress 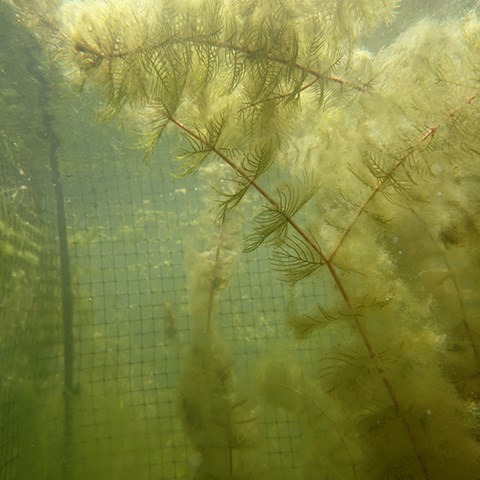 Eutrophication and the decline of large predatory fish are two major problems that have affected the Baltic Sea in the last decades. Both can lead to an increase in the amount of filamentous algae that can overgrow the bottom vegetation, which is home to many fish and invertebrates (small snails, mussels, crustaceans and bugs).

Eutrophication foster algal growth directly, through the excessive enrichment of nutrients in the water, while loss of predators have an indirect effect mediated by a trophic cascade: in the absence of large predatory fish, their prey, which are smaller fish feeding on invertebrates, become more abundant, and ultimately suppress the invertebrates that clean the bottom vegetation from the filamentous algae. When eutrophication and decline of large predatory fish occur together, the negative effects on aquatic plants can potentially be very strong.

“Many organisms can favor their own growth and survival under stressing conditions by increasing their numbers, a mechanism called density-dependent positive feedbacks. Hence, positive feedbacks can increase community resistance to disturbance. In this study we show that density-dependent positive feedbacks can buffer the negative effects on aquatic vegetation caused by eutrophication and decline of large predatory fish” says Dr. Serena Donadi, the lead author of the study and researcher at the Department of Aquatic Resources at SLU. The study, which is published in Ecology, was part of PlantFish, a 3-year project about bottom vegetation and large predatory fish in the coastal areas of the Baltic Sea (www.plantfish.se).

Researchers from Stockholm University and the Swedish University of Agricultural Sciences (SLU) in Sweden, and Groningen University in The Netherlands conducted a field experiment at the Askö island laboratory, in the western Baltic proper. Serena Donadi and co-authors planted Eurasian watermilfoil (Myriophyllum spicatum L.), a common aquatic plant in many freshwater and coastal areas, in three different densities, and tested the single and joint effects of nutrient enrichment and exclusion of large predatory fish in three coastal bays.

To exclude large predatory fish, the researchers used stainless-steel cages, covered with a plastic net, that were firmly attached to the sea bottom. Half of the cages had openings on the sides, which allowed large fish to enter the cages. To simulate eutrophication, slow-release fertilizer was added to half of the cages. The experiments ran for three months, during which the cages were monitored and cleaned assiduously. 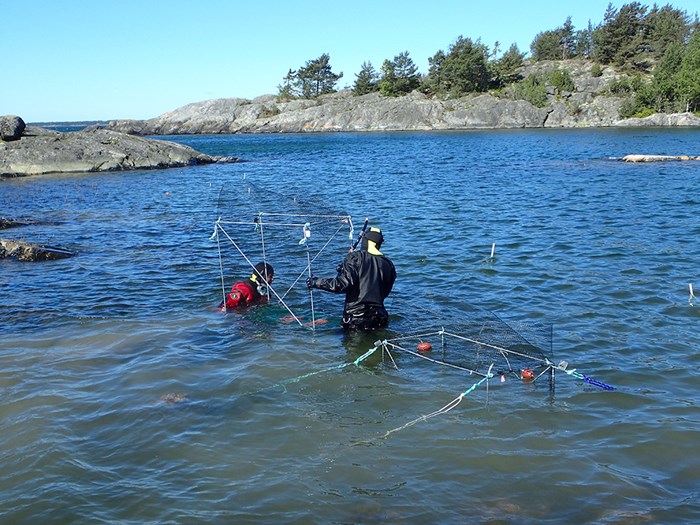 The reserchers conducted a field experiment at the Askö island laboratory, in the western Baltic proper. Foto: Serena Donadi. 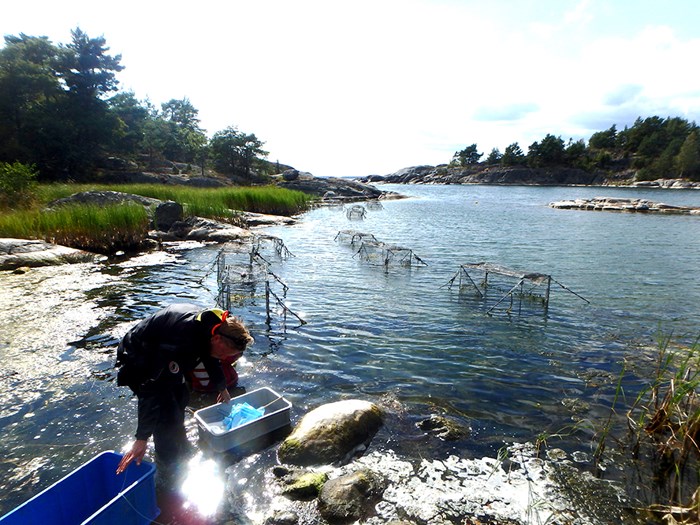 At the end of the summer, all cages were retrieved and the community inside each cage was carefully harvested and analyzed. Photo: Serena Donadi

At the end of the summer, all cages were retrieved and the community inside each cage was carefully harvested and analyzed. The results showed that in cages accessible to large predators, algal biomass was low, and plant density did not affect plant performance. In cages that instead excluded large predators (closed cages), algal biomass more than doubled, and plants were doing better (i.e. increased weight and more branches)at high plant density, indicating a density-dependent positive feedback. This effect, however, occurred only in the cages were fertilizer was added, that is, under eutrophic conditions.

The study suggests that submerged plants can better endure the stressing conditions caused by eutrophication and declines in large predatory fish when they occur in higher density.

Although further research is needed to investigate the prevalent mechanisms underlying positive feedbacks in bottom vegetation, and to identify potential threshold values in plant density, an important message can be given to managers and conservationists: maintaining high plant density is key for the conservation and well-being of habitat-forming bottom vegetation and the ecosystems that they support.