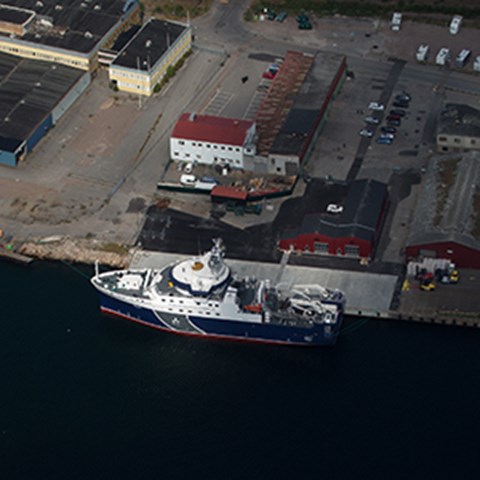 Last weekend, Sweden's new oceangoing research vessel arrived to its new home port in Lysekil. The vessel is owned by the Swedish University of Agricultural Sciences (SLU) and has been sailed home by the new crew from the Swedish Maritime Administration, which is responsible for the ship management and crew. Lysekils Hamn AB, the city of Lysekil's port company, has renovated the quay and constructed a harbour building for the vessel and the users, initially SMHI and SLU.

The trip from Armon Shipyards in Vigo in Spain took five days, en route Svea passed the English Channel and rounded Denmark. The weather was superb even in the Bay of Biscay that offered long and smooth Atlantic swell.

- The vessel has very fine sailing qualities and is very easy to maneuver, says Malin Andersson, of of the vessel's two captains. Svea has performed well both on open sea and in narrow waters.

An inquiry was done early on in the project of what harbour would be best for the vessel. In the end Lysekil harbour offered the best solution.

- Lysekil is a hub for maritime research in western Sweden, says Ellinor Jensen, project manager at Lysekil Hamn AB, the city of Lysekil's port company. SLU's Department of Aquatic Resources already has a laboratory in Lysekil and other universities also have offices in the municipality. We have worked hard to get SLU's research vessel here and to get everything in order on time, now we look forward to having Svea here during many years.

The new harbour in Lysekil has a reinforced quay and a newly constructed harbour building. The harbour building contains workshops, warehouse space and overhead travelling cranes e.g. for working with the trawl that SLU will use in it's fishing expeditions.

Part of the harbour building is used for the vessel's land connections. In addition to freshwater and access to Lysekil's sewer system the vessel will get electricity, heat from the district heating grid and data fiber connectivity.

- We turn of the vessel's own generator when we are connected says Malina Andersson. That saves fuel which means lower costs and is better for the environment. We will use renewable HVO diesel but since that is scarce in supply and the diesel we don't use can be used by someone else.

The arrival to Lysekil marks the beginning of a training and familiarization period for the crew and scientists from SMHI and SLU. In October Svea is planned to carry out her first expedition: BIAS. BIAS is an acronym for Baltic International Acoustic Survey and it is a hydroacoustic survey that SLU's Department of Aquatic Resources performs every year to monitor the herring and sprat populations in the Baltic Sea.

R/V Svea is Sweden's most modern research vessel. It is 69,5 meters long, 15,8 meders wide and has a dead weight of 3 420 tons. SLU is the owner and the Swedish Maritime Administration is responsible for crew, management and maintenance.

The vessel will initially be used by SMHI and SLU for maritime environmental monitoring and research. More universities and agencies are expected to join. There is also interest from Norway and Denmark.

More about the vessel www.slu.se/en/research-vessel

Lysekil is strategically situated in the middle of Skagerrak with a short approach and safe location in the Gullmar fjord.

Lysekil Hamn AB is a municipal port company which is responsible for parts of the port of Lysekil that are leased to e.g. SLU and the Swedish Coast Guard. Svea's home port is at the Gullmar quay. Lysekil Hamn AB has invested 12 million SEK (1.1 million €) in the new facility, primarily in the harbour building and the harbour area. The City of Lysekil has made additional investments to reinforce the quay. The agreement between SLU and Lysekils Hamn AB has a contract period of ten years with an option for SLU to prolong it with ten additional years.