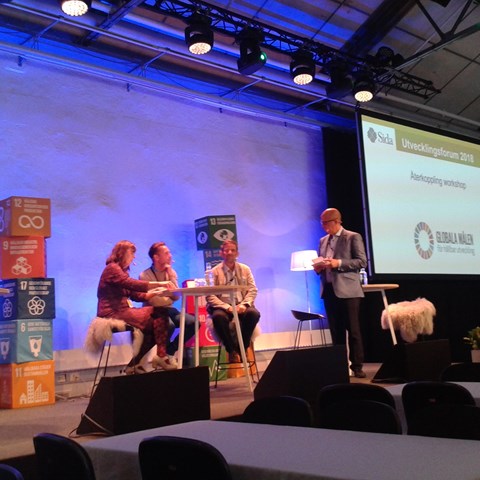 This year´s Development Forum took place on 17 October and focused on Growth within the Planetary Borders. This means that the issue of Environmental Economics came in the forefront, as Sida's Director General pointed out in the introduction. Inge Gerremo, Senior Advisor SLU Global was present at the meeting and this is his report and reflections.

Having myself been part of the introduction of environmental economics in Sida, 25 years ago, I felt this was to me the ultimate acknowledgement of a scientific dicipline that, at least, many political economists in those days were doubtful about. So, was also the situation at i Ultuna, as I remember it. Today this year´s Nobel Prize in economics is awarded two economist focussing on climate and environment, professors William Nordhaus and Paul Romer.

So, what could have been more appropriate than to let professor Thomas Sterner from University of Gothenburg, with long experience of this dicipline, supported by Sida, to give the opening adress to the Forum. The big audience, gathered at Münchenbryggeriet, was coming from most of the Swedish development organisations. The heading of the Forum was A Green Economy – What is it about, Why and How?

Sterner started to refer to the recently published IPCC-report on the impact of global warming of 1.5 degrees °C above pre-industrial levels. Time is short, he said, probably too short to keep the time-table. He also pointed at the noteble fact that William Nordhouse has projected 3.5 degrees °C in year 2100 as optimum. This seems to be far above what the planet could accept for a decent living.

Sterner referred to the two leading Swedish researcher in the development field, professors Johan Rockström and the late Hans Rosling. Rockström seems today to be rather pessimistic about the politicians ability to agree and deliver such political actions, which at least could reach the goals of the Paris agreement at 2 degrees °C. Rosling did not put much emphasis on environmental issues at al, including climate, but would, no doubt, have had to handle this important aspect in coming years.

In order to reach the neccessary goals Sterner pointed at economic instruments as the most efficient way forward. His pet instrument, he said, was petrol tax, which showed immeadiate effect on the road traffic. Carbon tax was another important instrument, where Sweden´s tax today is 168 USD/ton CO2, while USA has diffulties to accept even a level around 10 USD/ton. However, he mentioned that France now is on its way to look at this important political instrument in a similar way as Sweden. Other countries of that size might follow.

On the negative side he showed pictures showing today´s world leaders. An increasing majority of them seems to be authoritarian leaders with a rather different agenda and with very little belief and even willingnes to fullfil the obligations of Agenda 2030 as well as the Paris agreement on climate.

On the positive side he pointed at the recent development in eg Ethiopia, which has become a middle income country even without increasing the CO2-emissions. It is Africa's turn to get fast growth, he said. However, will it become so, looking at today´s fast population growth and climate challenges?

Based on this introduction a panel of Johan Kuylenstierna, Stockholm University, Maria Schultz, We Effect and Ulrika Åkesson, Sida, discussed How to Combat Poverty without Contributing to Climate Change. The discussion focussed primarily on Africa and the importance of the agricultural sector there including future Swedish development cooperation. It also became clear that the challenge ahead was not primarily to lift people from the so called level 1 to level 2, but from there to a real welfare situation.

This led to the next discussion on so called Green Financing with eg Britta Burreau from KPA Pensions and Erik Lysén from The Swedish Church. The tone was set by the fact that the amount of today´s development cooperation with Africa is not bigger in financial terms than the profits generated there and going back to investors outside Africa. In order to scale up development in Africa huge capital resources are needed and one contribution to this could be investments based on eg Swedish pension funds. This also led to a discussion on so called socially responsible investments, SRI, something which eg. is of great importance for the capital management of the Swedish Church. Even this discussion focussed a lot on the need for sustainable agriculture in Africa in order to boost development in general.

The theme of the group discussions was Sustainable Production and Consumtion. How will Africa organize it´s future food production with a population growing towards four billion people in the next century and with a rapidly increasing part moving to cities and towns? A gigantic challenge in itself and even more so with the climate change ahead. 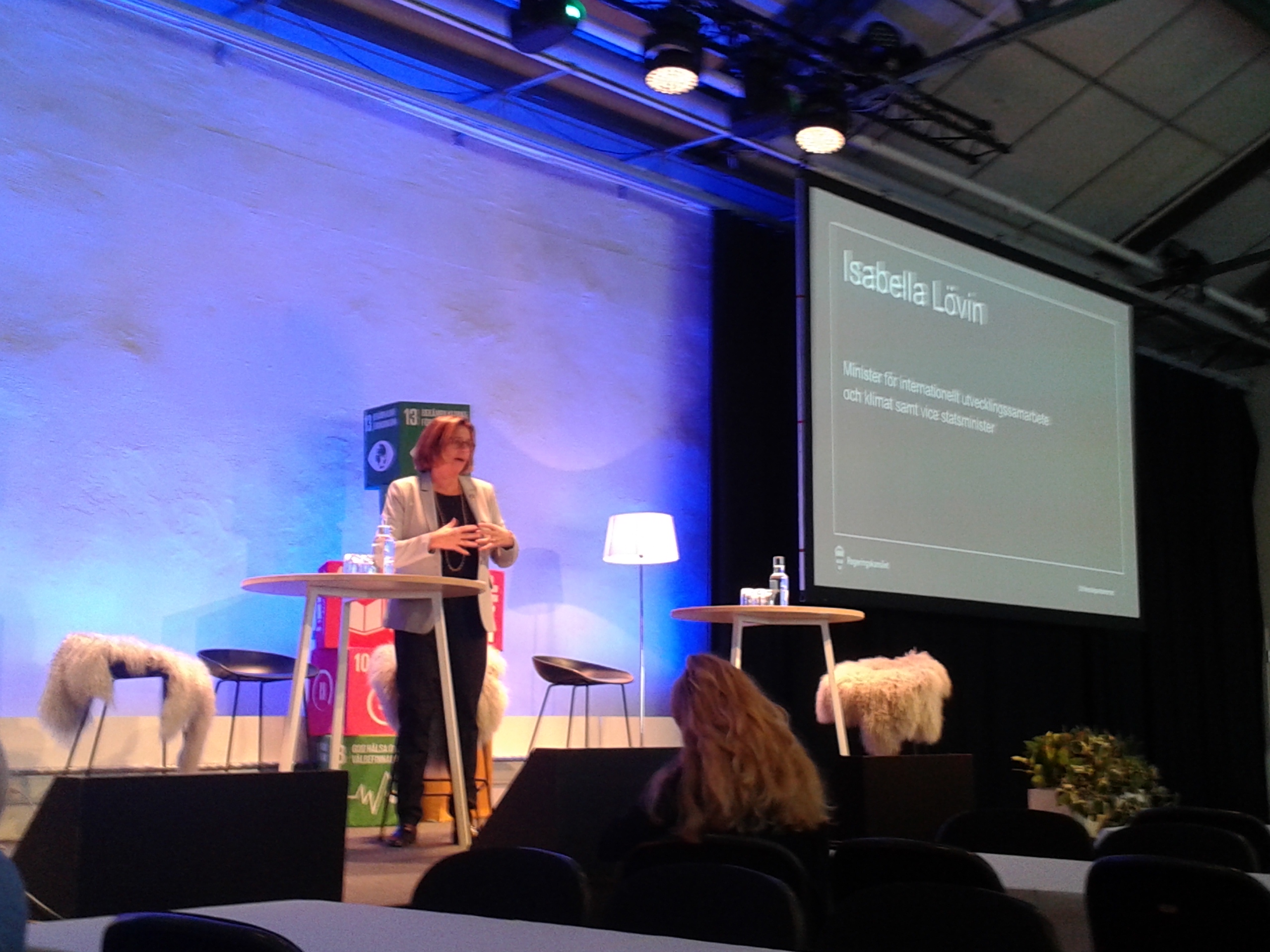 The Minister for International Development Cooperation and Climate, Isabella Lövin, started her speech by saying that the so called Overshoot Day for Sweden, when we had used this years resources for a sustainable development, was already in April. For the world as a whole it occurred in September. We have gigantic tasks ahead of us. The goals of Agenda 2030 have to be reached in 12 years.

My own reflexion was, that this is just not possible. On the other hand, I was quite convinced that the Millennium Development Goal to cut poverty by half by 2015 would not be reach, but was finally so thanks to Chinas remarkable development. However, focus now is on Africa, probably a much more complicated continent, consisting of 55 independent countries, with a lot of possibilities but also with huge corruption, mismanagement by many national leaders and on the top of that an already ongoing climate change.

The Minister focussed her presentation on one of the main objectives for Swedish development cooperation, Sustainable Economic Growth. The world´s eigth riches persons own as much as the poorest half, she said. Resources must become more equally distributed as well as equality must become much better. Developing countries must fight corruption even harder than today. They must get public institutions that people could trust and we must all work harder to mobilze enough financial resources. One specific priority area is climate related development. There is need for free and fair trade. No country has developed without becoming an integrated part of the world economy. 80% of the world´s food production comes from small farms. Those farms have often the highest productivity.

My own comment to that is that ministries of trade in the developed world must, at last, be helpful in various ways to let fragile agricultural sectors in developing countries, primarily in Africa, develop and mature in order to become more compatible. No doubt a delicate balance. Future development cooperation in sustainable agriculture and related fields will become increasingly important.

The Minister´s speech was followed by a discussion between Victor Galaz, Stockholm Resilience Center and Olle Torpman philosopher from Stockholm University on The Chances to Embark on a Green and Fair Development. How could developing countries get growing without turning into the same blind alley as we in the developed world seem to be heading? We all want welfare, Torpman said, but how? Why did we not solve the climate problems earlier, eg according to the Stern report, published Brittish government in 2006, Galaz asked himself? The cost was then calculated to 1% of the GDP up till 2050. The costs ahead of us are tremendously much higher. The sooner our politicians except that scenario the better. There is no other way forward, was Galaz final words to us in the audience and hopefully to be heared by the politicians. 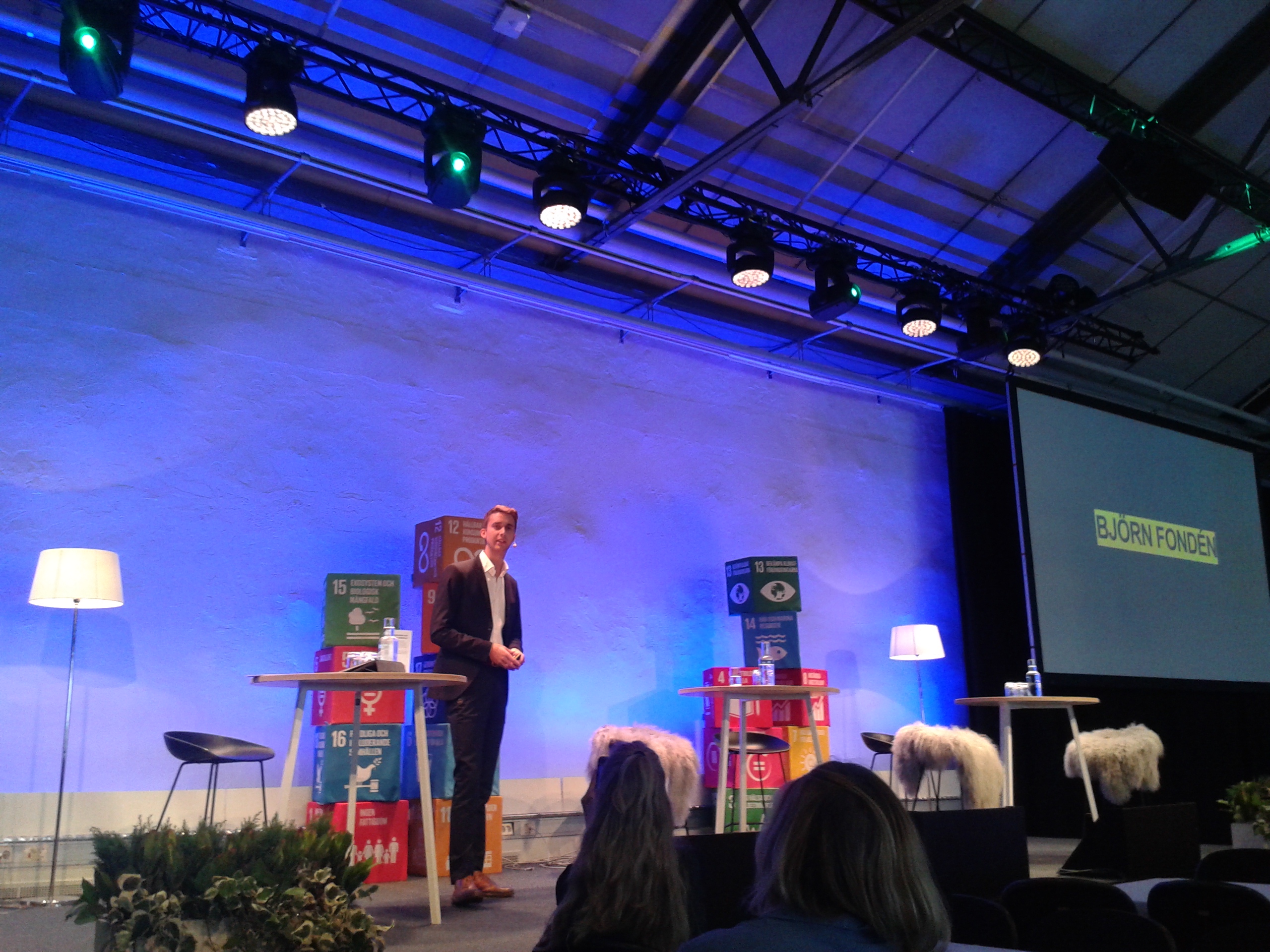 The development forum was finalized by Björn Fondén, a 21 year old activist, who pointed out that it is his generation´s world we are talking about. We are definitely in a great hurry. His generation´s priorities are definitely not the same as the one we have had from eg the 1950's and up til recently. When adult people give no attention to the advice not to fly as much as we do today and hope to do even more in the future or could not accept to eat less meat, knowing about the consequences, we must do someting ourselves, he said. The 15 year old Greta Thunberg did so, by demonstrating outside the Swedish Parliament for a more responsible cliamte policy and became world famous. We are 1,8 billion young people in todaýs world. You will hear from us!, Fondén finished his appeal.

It was no doubt a most inspiring day, at a more serious level than ever and with an appeal for urgent actions by the world´s politicians, I could summarize. SLU´s area of competence was much in focus. SLU Global will, no doubt, have an important role to play in many of the areas brought up during this year´s development forum so well organized by Sida.