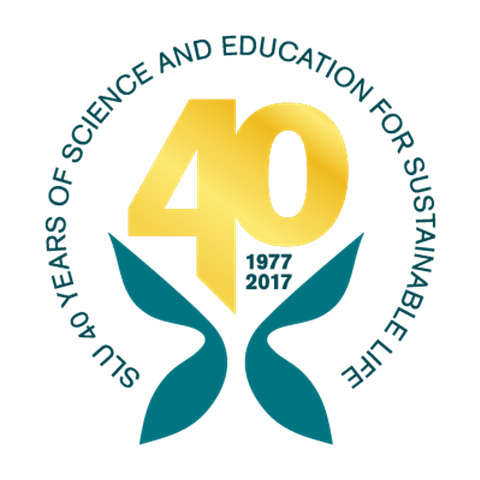 The Swedish University of Agricultural Sciences, SLU, was founded on 1 July 1977 by the merging of three university colleges. This means that SLU as a university turns 40 this year – a cause for celebration!

The anniversary celebrations will mainly take place during a few weeks in autumn. We will highlight how SLU has grown and developed into an internationally prominent university with unique, collected knowledge of how we can utilise our natural resources in a sustainable way.

The goal of the celebrations is to show, to our staff and students as well as the surrounding community, that SLU plays an important role in society – what we do and how we work with the assignment given to us. Staff and students at SLU should be proud of their university.

The activities relating to the 40th anniversary cover past, present and future perspectives. Read more about content and dates below.

All SLU staff will be invited to a one-day event at each of our main locations. The SLU management – the vice-chancellors and the deans – will attend and the programme will focus on current operations and future options. SLU staff will give examples of various topical and important fields. They will also give examples of how those outside of SLU view our role.

An important part of our current strategy concerns employees, and this will also be adressed during these meetings. To conclude the event, a small reception will be held.

The students' unions have been invited to arrange an activity for all students at each of their campuses – an initiative by the students, but supported by SLU. New students will also notice the anniversary celebrations during the autumn semester roll-call.

These anniversary activities will mainly be in Swedish, but with some events in English.

The campuses in Alnarp, Skara, Umeå and Ultuna will open to the public in some way. During these events, we will highlight SLU's versatility, for example by giving information on our courses and degree programmes. The public can also listen to our researchers taking part in 'Forskar Grand Prix' in various cities, watch the cows being released at Lövsta or visit 'Matologidagen' in Stockholm.

Activities aimed at more specific target groups will also take place during the  autumn, also under the jubilee flag. For example: Environmental Assessment Day, Erasmus Mobility Day, the Agri4D conference and the Doctoral Student Day. These activities will mainly be held in English.

SLU's substantial history has been studied in the projects 'SLU i sektorns och vetenskapens tjänst' and 'Vägval vid SLU'. They will be presented in seminars at the campuses in Alnarp, Ultuna and Umeå.

Lectures by this year's honorary doctors and the doctoral degree conferment ceremony will conclude the anniversary weeks. This year, they will be extra festive and hopefully reach a larger internal and external audience than usual. Interesting honorary doctors will contribute to highlighting the event.

Updated 2017-04-20. More activities will be added to the list as planning evolves.