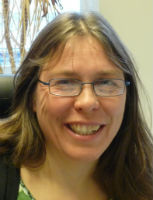 My name is Eva Johansson. I am a faculty professor, heading a research group, the Plant Product Quality Group, of around 25 persons. I am also the Vice Dean at the faculty with responsibility of strategic research questions. The main focus of my group is to combine knowledge in agronomy, environment, plant material and processing to obtain the most suitable crop based biomass for production of food, feed, material, chemicals and biogas.

Currently, I am holding a permanent position as Professor at the Faculty of Landscape Planning, Horticulture and Crop Production Sciences, SLU in Alnarp where I am also the Prodean of the faculty. As professor, I am heading a research group, “Plant Product Quality” of 20 persons, including me, one additional professor, two technicians, three senior researchers, one assistant professor, and twelve PhD-students. Further, at SLU, I am also coordinating “TC4F”, the strategic research environment grant from the government; Forests and other plants. TC4F is a collaborative research initiative including around 150 scientists over three faculties at SLU. My professional training is in biology at undergraduate level and in plant breeding at graduate level, with a PhD-degree in 1995. Thereafter, I continued as post-doc and assistant professor within the research area of combining agronomy, environment and plant breeding to obtain quality in food plants. As associate professor the focus turned more and more also into the area of biomass uses for industrial applications. A specific interest has been the opportunities to use plant proteins for various applications and their behaviour during processing. The main focus of my group today is to combine agronomy, environment and plant material in a way to obtain the most suitable crop based biomass for production of food, feed, material, chemicals and biogas. Furthermore, the Bioeconomy aspects of crop based biomass uses including economy and environmental calculations of crop based biomass uses as well as socioeconomic values has become an increasingly important aspect in our work.  In order to evaluate biomass for various aspects, we collaborate with technical universities and with the Maxlab facility in Lund. A strength of the group is also a long tradition of international collaboration and co-education of students at different levels.

Responsible for, organiser of and teacher at the 5p PhD-course: The use of molecular genetical methods within crop science, at the Department of Crop Science, 2002.

Responsible for, organiser of and teacher at the 5p PhD-course: Product quality and marketing aspects, 2004.

Responsible for, organiser of and teacher at the 2p (3 HEC) PhD-course: Popular scientific writing, at the faculty of Landscape Planning, Horticulture and Agricultural Science, 2001, 2007, 2009

At present I am supervising 13 PhD/Lic students, 9 as main supervisor and 4 as assistant supervisor, at least two of the PhD-students are supposed to defend thesis in 2017. Additionally two PhD-students are within the acceptance procedure.

The below mentioned students have defended their thesis under my supervision;

Phil Dr, Ali Malik, 2012, Governing grain protein concentration and composition in wheat and barley: use of genetic and environmental factors

Phil Dr, Nur Ahmed, 2012, Pesticide use in periurban areas. Farmers’ and neighbours’ perceptions and attitudes, and agricultural field influences on pests in nearby garden plants

Phil Dr Carolin Menzel, 2014, Starch structures and their usefulness in the production of packaging materials.

Phil Dr, Anna A Adevi, 2012, Supportive nature- and stress: wellbeing in connection to our inner and outer landscape.