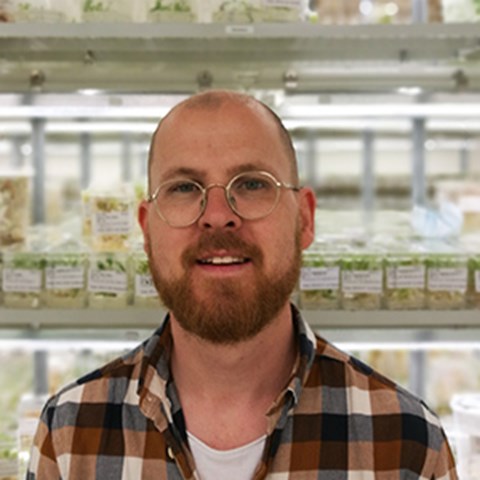 Kristoffer Jonsson at the Poplar Transgenics Facility at UPSC

The Scandinavian Plant Physiology Society (SPPS) announced this week that Kristoffer Jonsson from Rishikesh Bhalerao’s group at UPSC is one of the two awardees that receive the SPPS Best PhD Thesis Prize. The other awardee is Bin Sun, who did his PhD at the Department of Plant and Environmental Sciences at the University of Copenhagen. Both awardees will present their work at the SPPS congress in Svalbard in August this year.

Kristoffer Jonsson defended his PhD thesis in June 2019. Several articles resulted from his thesis. Currently, he is finishing up his projects as postdoc in Rishikesh Bhalerao’s group. In December last year, he received an international postdoc grant from the Swedish Research Council to start his own postdoc project jointly at UPSC and in the group of Anne-Lise Routier-Kierzkowska from the Plant Biology Research Institute at the Université de Montréal in Canada.

“When I learned that I was awarded this prize, I was of course thrilled and honoured. My immediate thought was that this award is equally a recognition of all the people that I have worked with, especially Rishi Bhalerao. Without his guidance and the environment, he created for me, we wouldn’t have done as well as we did”, says Kristoffer Jonsson. “While I’m honoured, I’m also surprised to be selected among all the other excellent PhD colleagues, who I know also worked hard towards their goals, and who I feel are equally deserving this prize. In any case, this should also be seen as a recognition of UPSC, which is a fantastic research environment that really nurtures young researchers.”

In his PhD thesis, Kristoffer Jonsson showed that the correct transport of components to the cell surface as well as the chemical composition of the cell wall are important for differential growth during the development of the apical hook. This hook is formed by seedlings that grow towards the soil surface after germination to protect their sensitive first leaves from damage. First when the seedling reaches the surface, the hook unfolds and the seedling opens its leaves towards the sun.

An uneven distribution of the plant hormone auxin is one crucial factor for differential growth. Auxin accumulates on the inner side of the hook and inhibits there the elongation of cells. Cells on the outer side of the hook, where the auxin concentration is low, expand at a high rate and this ensures that the bending is maintained. Auxin transporting proteins are controlling how much auxin is transported in and out of a cell and thus create the auxin gradient in the hook.

Kristoffer Jonsson studied how newly synthesized auxin transporters are packed in the distribution centre of the cell, the trans-Golgi network, and transported from there to the cell surface. He showed that the packaging and the transport of different transport proteins follows very distinct routes. If components of either the packing or the transport chain are mutated and not fully functional anymore, the transport proteins are not reaching the right place and the apical hook is not developing properly.

“The auxin gradient across the hook affects the composition and mechanical properties of the cell wall and vice versa. We demonstrated that the cell walls on the inner side of the hook became more rigid in response to auxin than on the outer side of the hook”, explains Kristoffer Jonsson. “We could show that this is not a one-way regulation. Signals from the cell wall affected the auxin machinery, enhancing the auxin response on the inner side, essentially forming a feedback required for proper growth asymmetry. These findings opened up many new questions that I will address in my new postdoc project.”

The SPPS Best PhD Thesis Prize is a monetary prize that is awarded every second year together with other awards given out by the Scandinavian Plant Physiology Society. The awardee must be a scientist that defended her/his PhD thesis in a Nordic country within the last two years. All SPPS awardees are expected to give a scientific talk during the biannual SPPS Congress that will take place this year on August 24-27 in Svalbard, Norway.